New Year Celebrations in the Triangle

It's time to say good riddance to one year and welcome a new one.  The Triangle always knows how to party and the New Year is certainly no exception.  In addition to First Night Raleigh, there are some other great options for catching tunes and enjoying friends. KINGS:
Relive the joys of Hopscotch and party to stimulating beats created by Body Games and T0W3RS at Kings.  The multi-instrumentalists of Body Games will keep you moving well beyond the drop of the acorn with heavy electronic textures and lurching beats.  Add in the whimsy of Derek Torres of T0W3RS and the result is a memorable New Year's Eve for the small cost of $12.50-$15.

Big Something will keep things moving on Cabarrus Street at Lincoln Theatre.  Their dance-grooving space-rock anthems create an unforgettable experience perfect for celebrating a new year.  The band's unique mix of rock, jazz, funk, and reggae pushes out beats to please every lover of music.  Big Something will be supported by Big Daddy Love, a five-piece rock and roots band that creates a unique sound they refer to as, 'Appalachian Rock'.  The party starts at 8 and is well worth the $20/$25 ticket.

For the local rockers, The Pour House has designed a lineup that won't disappoint.  Corrosion of Conformity headlines the night.  Decibel Magazine stated that COC serves as, "a crucial stylistic lynchpin in the bridge between metal and punk" that "irrevocably reshaped crossover's sonic possibilities."  Supporting COC are two other heavy hitters, Bedowyn and Demon Eye.  These three bands will get you ready to kick some serious ass in 2015.  Show starts at 9 and $20/$25 will get you in the door with a complimentary champagne toast at midnight.

Of course we can't possibly forget that The Avett Brothers will celebrate the New Year in Raleigh with a performance at the PNC Arena.  These North Carolina favorites have been doing some intense touring all year promoting their latest release, Magpie and the Dandelion.  Ticket and traveling packages are available at the Avett Brothers website.

Get "Out of this World" at First Night Raleigh 2015 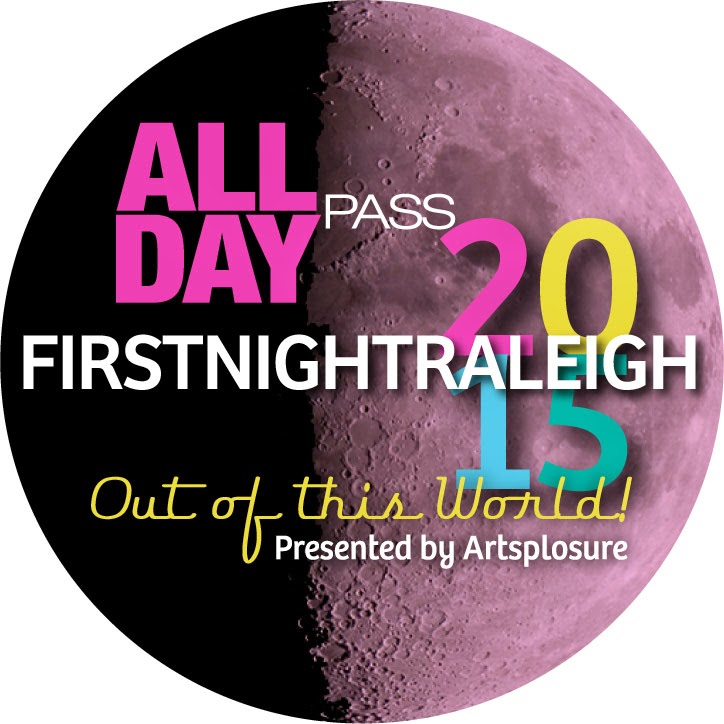 First Night Raleigh 2015 is "Out of this World" with plenty of activities and performances to support that theme.  The city is providing entertainment for the whole family with animal exhibits, ballroom dancing, and of course, the first night ferris wheel.  The music lineup does not disappoint with local and tour favorites serenading the crowd through the night. 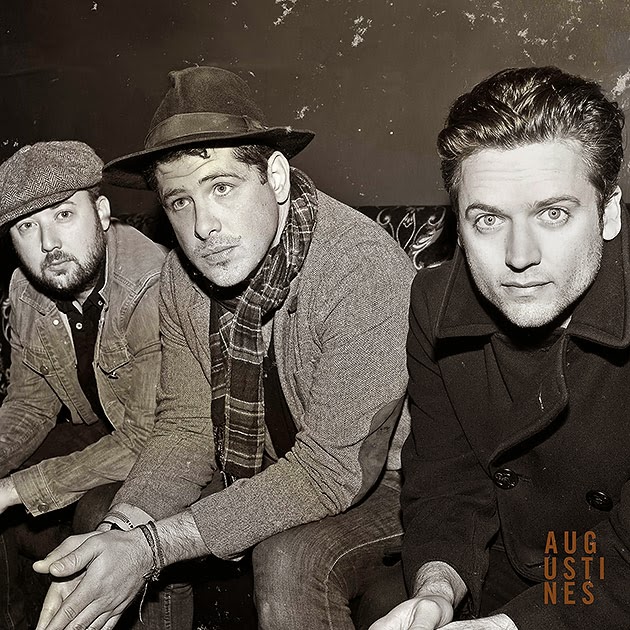 The Brooklyn based Augustines will share their indie alt-rock sounds with the Triangle on the main stage in City Plaza at 10:30.  They are known for their high-energy shows with strong audience interaction, so they are sure to please.

The Triangle's own The Love Language will grace the stage at the Contemporary Art Museum at 8.  The Love Language shares the genuinely emotional writing of Stuart McLamb with the support of an equally impressive group of rotating musicians. 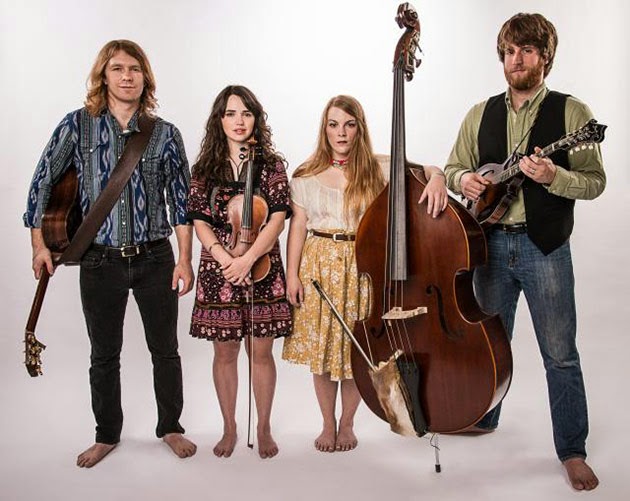 The Barefoot Movement, one of our faves from The Bluegrass Festival, will return for First Night.  Catch this down home bluegrass band gathered around one mic on the City Plaza Main Stage at 6:15 and again at 9 at the Church of the Good Shepard.

There is an endless list of performances and activities to enjoy at this Artsplosure event, so be sure to check out the official First Night Raleigh 2015 website for a complete schedule. 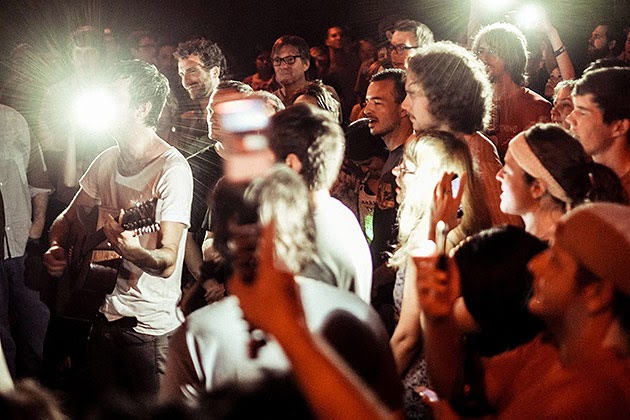 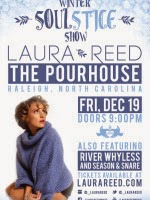 Younger Brother Productions is presenting the Winter Soulstice Show at The Pour House this Friday, December 19.  Laura Reed will headline the event with support from Asheville's River Whyless and Raleigh's own Season and Snare.

2014 has been Laura Reed's year with the release of her full-length album, The Awakening, just being one of her many accomplishments.  Another highlight was the opportunity to sing the National Anthem at the New York Knicks and New York Rangers games.  Reed's music is infused with soulful blues meshed with infectious melodies.  The genuine lyrics in The Awakening express love, loss, and self-realization.


Younger Brother Productions have partnered with The Raleigh Rescue Mission to collect goods for the Triangle community.  The organizations are encouraging the donation of two or more canned goods and/or gently-used coats for a $2 discount for admission.  The doors open at 9, the fun begins at 9:30.

To get warmed up for this soultastic show, check out Laura Reed's cover of  Muddy Waters' "I Be's Troubled":

Forecastle 2015 Presale Begins Friday, December 5 at Noon EST Limited number of specially priced weekend passes available
LOUISVILLE, KY – Just in time for the holidays, The Forecastle Festival will host a special presale on Friday, December 5 at noon EST through ForecastleFest.com. Louisville’s three-day festival celebrating the best in music, art and environmental activism is set to take place July 17-19, 2015 at Louisville’s Waterfront Park.
A limited number of general admission weekend passes will be available for $129.50 plus applicable fees. General admission travel packages, which include lodging at the Brown Hotel or Seelbach Hilton, will also be available beginning Friday. Full ticketing options, including VIP, payment plans and single day tickets, will be revealed in early 2015 along with the festival lineup.
Exclusive fan hotel rates for the festival weekend are available now. Visit ForecastleFest.com for a full list of pricing and locations.
For the latest news and updates from Forecastle Festival, visit ForecastleFest.com, Facebook and Twitter, and sign up for the Forecastle newsletter.
Forecastle is held at Louisville’s scenic, 85-acre Waterfront Park. Since 2002, the Festival has featured musical guests including Outkast, The Black Keys, Jack White, Beck, My Morning Jacket, String Cheese Incident, Bassnectar, Wilco, The Flaming Lips, The Smashing Pumpkins, Widespread Panic, The Avett Brothers, Pretty Lights, Sleigh Bells, Spoon, DEVO, Band of Horses, She & Him, Big Boi, Girl Talk, A-Trak, Sleater-Kinney, Umphrey’s McGee and many more. The festival also highlights the best of bourbon country with the Bourbon Lodge, an interactive experience more featuring more than 10,000 square feet of bourbon-focused activities and tastings.
*Information Courtesy of Forecastle Festival, AC Entertainment, and Big Hassle
Posted by Jess at 1:07 PM No comments: