Surfer Blood will bring their indie rock beachy vibes to Kings this Saturday, November 28.  The West Palm Beach band are on tour in support of their third studio album, 1000 Palms on Joyful Noise Records.  Surfer Blood promises a relaxed and catchy sound with smooth harmonies backed by intricate percussion and fluid guitar riffs.  They have shared their talents by performing with the likes of The Pixies, on the Jimmy Fallon Show, at Coachella and several other major festivals.  Lucky for us, they're right here in our backyard at Kings.  To sweeten the pot, Cleveland's own The Lighthouse and the Whaler and local indie dream pop band, WOOL are getting the night started.

Get out of the house and shake off the trauma from too much holiday family time.  The show starts at 9 and tix are $12 at the door.  In the meantime, take a look at Surfer Blood's latest video for "Grand Inquisitor."


In addition, be sure to check out Surfer Blood's website for information about donating to Thomas Fekete's fundraiser.  Fekete has been the guitarist for the band for 6 years, but due to battling a rare and aggressive form of cancer (a sarcoma), he's unable to tour and make money for this treatments.  All donations are greatly appreciated by Fekete and the band, so head on over to the website and learn more about donating.
Posted by Jess at 7:23 PM No comments:

Boston-based band Air Traffic Controller will take on the Cat's Cradle Back Room stage on Monday, November 23.  This indie rock group gained their name from front man, David Munro, who served as a real-life air traffic controller for the US Navy.  He started developing his music while working this gig and discovered he had gained some faithful music fans upon his return to Boston.  Fast forward to 2009 and the band released their debut album, The One.  This release gained them attention by MTV, being nominated for "Best Break-Out Artist" and winning "Best Indie Rock Act" at the 2010 Boston Music Conference.

In 2011, their sophomore album, Nordo, was released.  Sticking with aircraft terms, Nordo refers to an aircraft that has radio failure while flying.  Analyze that for a minute and it's plain to see that the main focus of the album is relationships and all of the difficulties that accompany them.  Nordo contains all too relatable lyrics wrapped in catchy melodies and intricate harmonies.

ATC is featured on Funny Or Die and is being played on a regular rotation at MTVU.  Get your week started right with Air Traffic Controller and Jared & The Mill at Cat's Cradle Back Room.  The show starts at 8 and is $17 at the door.  Check out the video for one of ATC's more recent singles, "The House."

Cat's Cradle was packed with a sold-out show on Tuesday, November 10, to hear the bearded master of soul, Nathaniel Rateliff.  The rootsy crooner, along with his impressive six-piece band, The Night Sweats, lured a broad-spectrum of fans to the venue.  All ages were represented at this show, ranging from middle school to retirement, Nathaniel Rateliff obviously appeals to more than just one crowd.  This explains why his shows are selling out everywhere in a matter of days.

The band takes over the stage, strumming to the beat of "I Need Never Get Old."  Soon after, Rateliff appears donning his signature hat and wearing head-to-toe black, like all bad-ass rockers do.  The foot-stompin' begins like a wave, from the stage through the entire sold-out crowd.

The band makes their way through other notable songs like, "Look It Here" and "Howling at Nothing" as fans sing along with every note of each bluesy tune.  Spiraling basslines, the hum of the organ, and thumping beats keep the crowd moving with the rhythm.  Listening to Rateliff, it's understandable why his sound is continuously compared to Otis Redding's deep soulful blues.  It's more complex to picture him as an alt-folk soloist as he was for so many years.  This current sound seems to emerge from his inner being with lyrics that express where he's been and where he plans to go. 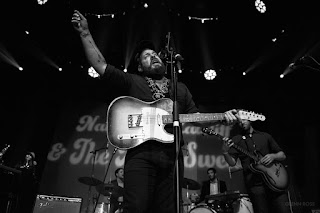 The show continues with other favorites from the latest self-titled album, like "Shake" and "Thank
You."  "Trying So Hard Not To Know" leads into Rateliff's smash hit, "S.O.B."  The crowd cheers to hear this familiar tune and everyone collectively yells, "son of a bitch" with enthusiasm and trepidation.  Hand-claps and foot-stomps naturally ensue, followed by the chanting of passionate woah-woah-woahs.  The music dies down and begins to fade before the crowd-favorite is complete.  The band says their goodbyes and coyly escapes backstage, but we all know the party is far from over.


With a few short moments, the seven-piece returns to command the stage fading back into the rhythm of "S.O.B."  Everyone joins together in song once more, creating a scene reminiscent of a Sunday morning church gathering.  "S.O.B" meshes in and out of a cover of The Band's, "The Shape I'm In," giving the show a concluding feeling resulting in audience satisfaction.

2015 has been an unforgettable year for Nathaniel Rateliff & The Night Sweats. Between touring with sold-out shows and appearing on The Tonight Show, the band has more than proven their musical talents and audience appeal.  Keep your eye out for more appearances; they've already been added to Firefly Music Festival's lineup and will certainly be a popular addition to other festival's bills.
Posted by Jess at 2:52 PM No comments:

After spending time on the road with Alabama Shakes and Angel Olsen, the Promised Land Sound makes a stop in the Triangle this Thursday night to play The Cave in Chapel Hill.  Presented by Durham's Pinhook, Promised Land Sound is currently celebrating the release of their second full length album, For Use and Delight, and receiving lots of praise along the way.  Hailed as "Nashville's garage-psych heroes," by Rolling Stones Magazine, the band has demonstrated a knack for emotional songwriting and producing an evolving sound from their first album.  More recently, the band caught the attention of none other than Ryan Adams and as indicated in his Instagram post:

Posted by ChrisJ at 8:08 PM No comments: 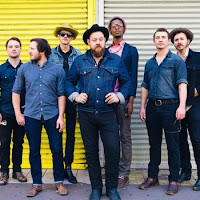 Shake off the rainy-day blues with Nathaniel Rateliff & The Night Sweats at Cat's Cradle tonight.  The band has been touring around the States, made a few stops to chat with the likes of Conan and Jimmy Fallon, and will soon be traveling overseas.  With their Colorado roots and bluesy rock sound, the group has been the pleasant surprise of the year.

Take a listen to their foot-stompin' hit, S.O.B.  They'll be playing a sold-out show tonight at Cat's Cradle with support from singer-songwriter Caroline Rose.