Stay onboard long after the festival lights go down with Forecastle Late-Night on the Belle of Louisville presented by Rhinegeist and powered by Do502.
Yacht Rock Revue™ will take over the Belle of Louisville on Friday, July 14. Known as the Greatest Show on Surf, this nautical-themed group will feel right at home on the Ohio River, taking their act to the high seas with epic (spot-on) covers of classics by Hall & Oates, Steely Dan, and so much more.
On Saturday, July 15, the legendary Preservation Hall Jazz Band will be joined by special Forecastle guests to transform the historic Belle of Louisville into our very own New Orleans French Quarter. The band will bring a taste of The Big Easy to Louisville, performing their one-of-a-kind jazz onboard America’s oldest steamboat.
“Those who have had the chance to attend one of our late-night shows know about the amazing vibe that is created in an intimate, historic venue like the Belle. It’s one of those ‘only at Forecastle’ experiences that can just be so special,” said Forecastle’s Captain JK McKnight.
Back on land, Headliners Music Hall will keep the party going late with Real Estate and special guest on Friday, July 14 and The New Pornographers with special guest on Saturday, July 15. Doors open at 11 p.m. EDT and music starts at midnight for all shows.
Current Forecastle weekend pass and daily ticket holders (as of Monday, April 24 at midnight) will have access to an exclusive presale to purchase tickets before they go on sale to the general public Friday, April 28 at 10 a.m. EDT. Ticket buyers should check their inbox for full details. Presale runs from Wednesday, April 26 at 10 a.m. EDT until Thursday, April 27 at 11:59 p.m. EDT.
For more information and to purchase tickets, visit forecastlefest.com/late-night-shows.
Posted by Jess at 10:14 AM No comments: 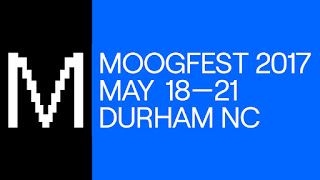 For a chance to win a pair of GA tickets, hop over to our Facebook and Twitter pages and enter by Sunday, April 23. A winner will be chosen on Monday, April 24th.  Good luck!

Moogfest has also invited artists including Gotye and Peanut Butter Wolf to help honor some of the innovative musicians we lost in 2016, including Jean-Jacques Perrey, Pauline Oliveros, Bernie Worrell and Keith Emerson. This 2017 lineup reinforces Moogfest’s commitment to bold experimentation, with some of the most important musicians and thinkers of our day helping to blur the lines between audience and artist, conversation and collaboration, technology and creativity. To purchase tickets, head over to the Moogfest website. Better yet, try your hand at winning a pair with The Triangle Beat!

The Moogfest 2017 Schedule is Now Live!

Workshop registration starts this Friday. There is still time to purchase an Engineering or VIP Pass to get prioritized access to workshop registration.
Create Your Own Sched
With hundreds of artists, speakers, sessions and venues, Moogfest contains a vast galaxy of discovery.

Once you have your ticket, it's  recommend you begin planning your weekend by crafting a personalized schedule. You will need your own Sched account to do so. Simply visit this page to get set up.
Workshops Workshops Workshops
Moogfest prioritizes intimate spaces for collaboration and creativity. Workshops are an essential part of the Moogfest program, but space is extremely limited and these sessions fill up fast. This year, we have improved our workshop registration process to make sure VIPs get their top choices, and everyone else has a chance to attend a workshop as well.
For complete instructions on signing up for a workshop, head over to the Moogfest website. Happy workshopping!