WKNC 88.1's Local Band Local Beer series continues this week at Tir Na Nog Irish Pub.  Join the celebration of local talent this Thursday at 9:30 with one of our favorites, Nuclear Honey.   To learn more about the band, take a look at our previously posted spotlight. 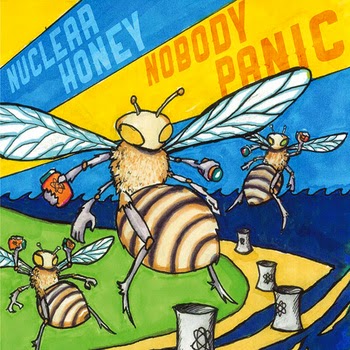 Fast forward to the present and Henderson has exchanged his drums for a guitar and the lemonade stand for one of the many music venues around the Triangle.  Henderson, along with Reaves Greer, and  Kenan Jernigan, have joined forces to make the southern rock and roots band, Nuclear Honey.

Prior to forming Nuclear Honey in 2011, Greer and Henderson played in two other local bands, Ascella Vega and Sign of the Rhino.  These collaborations started in high school and have all been a part of   their musical journey, leading them to their current sound.


Henderson and Greer released Tombstone Sessions as their acoustic debut EP.  The recording was done with Dave Bartholomew in the office of his family's tombstone engraving business, hence the title. They later decided to expand their sound and get plugged in, adding three new band members. With the help of the fundraiser Kickstarter.com, they recorded Nobody Panic, a 7-track album that was released in the summer of 2013.  The album provides the classic sounds of pure rock-n-roll with folk roots.