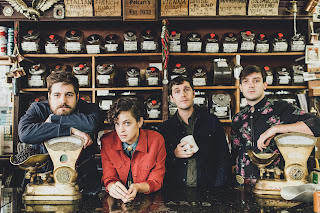 Chapel Hill quartet Mipso is in the midst of their 35 date album release tour for Coming Down The Mountain.  According to the Americana-roots band, their fourth studio album explores "ideas of our changing relationship to the idea of home and about being pushed or pulled by forces stronger than us."

Ahead of their special homecoming show at The North Carolina Museum of Art on May 6 with River Whyless, I chatted with fiddler Libby Rodenbough about touring, MerleFest and appreciating the little things.


TTB:  How does Coming Down the Mountain differ in sound from Old Time Reverie?

LR:  A couple of people have asked us if we see this album as a departure because we added drums. I think that's the typical response of adding electric instruments to a string band, but I think for the band it feels like a part of our trajectory. We're song writers mostly and we like to create music that supports the songs we write. With this album it felt like the instrumentation that could support these songs was a little different.  Also, we were trying to keep ourselves entertained and it was fun for us to try some new sounds in the studio and see how we could make them our own.

TTB:  Tell me about the creative process for this album.

LR:  We got together in a friend's barn near Saxapahaw where they grow fields of rye, which was really beautiful.  We plugged in our amps for the first time and tried songs a different way.

TTB:  What is the writing process for developing new songs?

Usually what happens is we write things on our own; sometimes they're finished songs, sometimes they're just ideas or just a chorus.  Then we get together and flush them out as a foursome.  We're all interested in writing a part of it, so even if one of us writes a song there's usually input from others before we record.

TTB:  What was it like working with Brad Cook of Megafaun?

LR:  It was so fun!  He is such a force of positive energy.  He is philosophically tied to not over-thinking things, which is good for us and for any artist in the studio because that's so easy to do.  He wanted us to basically go into the studio and be a band; to just play like a band and not worry too much about every little detail and kind of trust that the spirit of the song would be what was most important.

TTB:  You are in the midst of a 35 date tour with some festival stops.  What are the biggest challenges of being on tour?

LR:  Diet, exercise, and routine.  If you're a person who enjoys routine, which I think all of us do to some extent, then being on the road is a real challenge. Touring has made me appreciate routine in a way that I might not have otherwise.

TTB:  On the flip side, what are your favorite parts of touring?

LR:  I love imagining my life in every little town that we go through.  I love walking into a town with fresh eyes and trying to put together a little story in my head of what it's like to be there, what the people do everyday and what types of food and music they like. Obviously there are a lot of similarities and everyone is a product of an internet age, but also there's still a lot of distinction between places and that's something that could easily be overlooked if you weren't traveling to a lot of little towns like we are.

TTB:  What are some of the highlights from your time as a Mipso member?

LR:  It all runs together in some way.  I think there are a lot of small moments that don't get recorded as some kind of lightning strike in my memory, but there's this warmth that I feel from the accumulation of all of these small moments.  I think the stuff that's most meaningful to me is the smaller and quieter moments: the little word of appreciation from someone you admire or seeing a little kid who is starting violin lessons light up when he watches you play, that's pretty special.

TTB:  You just played at MerleFest over the weekend.  How does MerleFest differ from other festivals?

LR:  It is a world-class festival that simultaneously feels like a state fair.  It feels extremely local, but the programming is excellent.  It has a total home-grown feeling. This festival was started by Doc Watson and I think that the spirit of the founding continues and a lot of festivals can't say that.  It's also great because of the spirit of Doc Watson it's not too exclusive with what constitutes traditional music, they always say it's traditional plus and that allows it to be as encompassing as anyone wants it to be.

TTB:  What's next for Mipso?

LR:  There will definitely be more new music  We never really stop writing and as soon as we release things I'm usually antsy for the next thing we're going to make.

TTB:  The upcoming show at the North Carolina Museum of Art also has Asheville's River Whyless on the bill.  Have you ever played with them before?

LR:  No, we've never played with them. We've heard so much about them and we've admired their music for a long time; it's really exciting to get to play with them. It's probably one of the most exciting bills we've ever been a part of.

TTB:  What else would you like to tell your fans?

LR:  That we are really excited about the show at the NC Museum of Art.  We've played so many shows in the Triangle that people might think we're accustomed to it, but this is a new benchmark for us. Playing this huge outdoor amphitheater at the Museum of Art and playing with River Whyless, we've been eagerly anticipating this for so long now.  It's a really big deal to us.

Tickets are moving quickly for this memorable night under the stars with two of North Carolina's finest Americana-folk bands.  Head on over to the North Carolina Museum of Art's website to secure your spot.  Take a listen to the album's title track, 'Coming Down the Mountain':