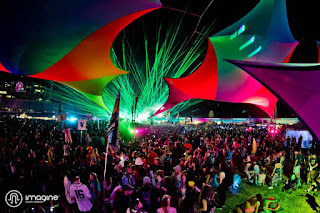 Stepping onto the Atlanta Motor Speedway for the first night of the Imagine Music Festival, I couldn't help but pause and appreciate the evolution of this magical event. Three years ago, my two festie-besties and I entered our first Imagine at Atlanta's Historic Fourth Ward Park. At that time, the event was in its second year and held three stages and minimal space, however the effort put into the fest was huge. The three of us didn't quite leave IMF the same; we bonded as friends, we created unforgettable memories, and we learned that we needed more moments like this in our lives. IMF has since grown to a six-stage wonderland at the speedway. Spanning 887 acres, the festival now allows for the fun of camping, endless sensory adventures, and most importantly meaningful memories.

Day 1 presented a great beginning to the weekend. We got the day started with Yheti at the Disco Inferno Stage. With his creative flow and unique melodies, he brought the perfect amount of weird to allow for a smooth transition from the real-world into festival mode. Afterward the main stage, Oceania, brought on one heavy-hitter after another. For our crew, it started with Datsik, who came out on stage with the bass guns blazing. He started on a high level and never came back down, keeping the crowd amped and ready to go all night. Finishing out the stellar lineup was Tiesto. Filled with power and energy, this EDM legend kept the crowd moving for his entire 90 minute set, playing favorites both old and new. 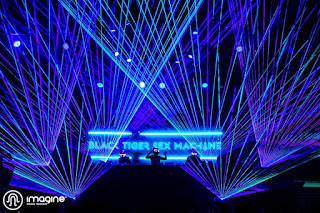 After an exceptional opening day, we were stoked for day 2. The night started with one of our most anticipated sets: Black Tiger Sex Machine. After recently experiencing them at Electric Forest, I could not wait for them to take me to church once again. Just as I had imagined, they did not disappoint. The energy that comes from a BTSM show is hard to match. All three members engage with the crowd, creating a connection that pulls everyone together. Add that to the visuals that match every beat and the perfect set is created. Appropriately following that powerful set on the Oceania Stage was Zomboy with his infectious beats, continuing what BTSM started. Then came Flux Pavilion. I have to be honest, I saw Flux once before and found his set to be mediocre. I was beyond surprised and pleased that he proved me wrong at Imagine. Using heavy bass, melody and rhythm, Flux had the crowd eating out of the palm of his hands. He mixed his own popular song "Bass Cannon" into an intricate web of bass and beats, recreating my personal favorite tune into a whole new sound. Of course once he played "I Can't Stop," everyone lost their minds, screaming the words that caused an echo across the Atlanta Motor Speedway. 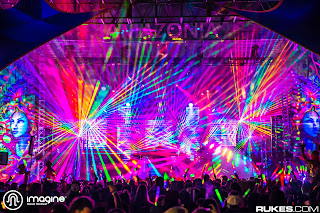 As if all of that wasn't enough excitement for one night, we had to make a nearly impossible choice: Pretty Lights vs. Deadmau5. How does one choose between two legends? We decided to go with Pretty Lights because we were curious and intrigued with the fact that he was playing a live set. This was a new experience for me and well-worthy of the hype. Seeing the already mystical music by Pretty Lights played live on stage with actual instruments was a music nerd's dream come true. As we all know, Pretty Lights is a master at putting his audience into a visual trance and this set was no exception.


The last day is always a little sad because the thought of returning to reality is truly depressing. However, with the enchanting lineup on Sunday, it was impossible to feel anything except pure joy. I'm personally not always into the "feelsy" electronic music, but the Sunday lineup got me trapped in a zone of the feels and I loved every second of it.

Who better to start a heartwarming day than Illenium? This eclectic producer is a master at giving purpose to his music while still creating a hype show; generating a perfectly balanced experience that is sure to captivate the entire audience. Creating a flawless transition was Seven Lions hitting the stage right after Illenium. With his visuals being almost as beautiful as his flowing hair, I couldn't help but feel I was existing in the world he created on screen. Scenes of nature meshed with angelic melodies took the audience to a whole new level of peaceful bliss that felt like entering a dream. As if the night could get any more whimsical, the final set on the main stage was Above & Beyond. This was my first time seeing these trance gods and all expectations were exceeded. They worked their magic to make the crowd feel as one, moving and singing along to every calming beat. Of course, this was the main stage finale, so Imagine had to pull out all of the stops with a mesmerizing firework display. The festival couldn't have ended in a more beautiful way with soothing melodies, a fantastic light show, and my two best friends. 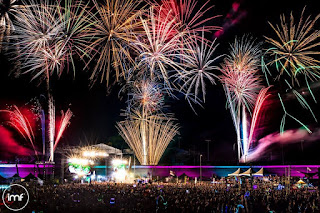 After the finale on the main stage, Claude VonStroke was the sole survivor keeping the crowd moving at the Disco Inferno. Once we finished grooving to his set, we all headed toward the exit of the speedway.

As we walked up the steps, we turned to span the festival, taking in the vibrantly flashing lights, the creatively dressed festies, and recalled entering this same festival three short years ago. The setting has changed, the space has grown, but that same intimate and genuine feeling first created by Imagine in the beginning, holds strong three years later. That's what a notable festival is all about: the best of friends creating new memories with an eloquent soundtrack constantly spinning in the background. Thanks for giving us a place to expand our memories, minds, and friendships, Imagine. We'll see you next year for your fifth birthday! Start making your own memories and grab the $99 customer appreciation passes while they last. How do you imagine? There's only one way to find out... 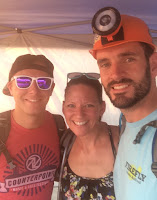 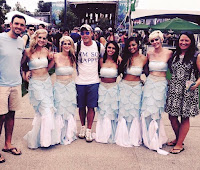