Langhorne Slim and The Lost at Last Band Play HRB 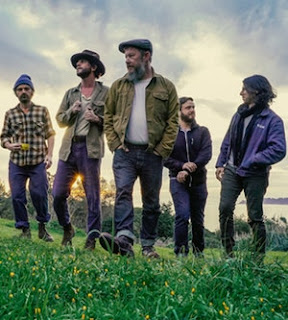 Langhorne Slim returns to Haw River Ballroom this Thursday, November 8. For those of us lucky enough to have experienced his edgy shows before, it's easy to recall Langhorne's tendency to enter the crowd and sing to onlookers while hoisted upon someone's shoulders. In a world filled with fake everything, Langhorne is a reminder that real still exists - through his passion, his lyrics, and the soul he shares with his crowd each and every show.

As the phenomena of instant connection and the need for constant self-improvement further implant their tendrils into our culture, the ability to truly connect with each other and ourselves has begun to fade. As we all reach for our smartphones to gaze upon the manufactured perfection of the lives of those we admire, we lose sight of what makes our own lives important.

Nashville’s Langhorne Slim interlaces this theme throughout his new album.“Everyone’s searchin’ for something better around every corner, but it’s already right here,” Langhorne says.“We’re all born whole – through livin’ we fall apart…”

The songs on Langhorne Slim’s newest album, Lost At Last Vol. 1, released November 10, 2017, challenge the idea of social rigidity: the attitude that there’s a “correct” way for us to live and a side we should be on. He urges the world to see through the idea that by following that path and focusing only on fitting the mold, one will have lived a good life. He re-interprets the sound of the free-spirited yet vulnerable everyman heard on 2015’s The Spirit Moves and brings forth anew the call for us to abandon “the fold” and re-connect with ourselves and each other.

Langhorne Slim is no stranger to the world of popular culture and commercial success. Lost At Last Vol. 1 is his sixth full-length album; throughout his career he has been defined by reflective songwriting and passionate delivery. Slim’s last album cycle alone garnered him his third appearance on Conan O’Brien’s late-night show, as well as a feature on CBS Saturday Morning, and the highest charting debut of his career. O’Brien, a personal fan of Slim stated, “After one listen, I became an instant, almost obsessive fan.” Slim has consistently toured on his own, and has appeared on extensive worldwide runs throughout his career with artists such as The Lumineers, The Avett Brothers, Grace Potter & The Nocturnals, Gregory Alan Isakov, Josh Ritter, The Devil Makes Three, Sara Watkins, and more. He’s also appeared on many festival stages, such as Bonnaroo, Newport Folk Festival, Outside Lands, Lollapalooza, and the Philadelphia Folk Festival.

Lost At Last Vol. 1 is a record that Langhorne wanted to do differently from the start. “Almost immediately after recording our last record, The Spirit Moves,” Slim says, “I felt a deep desire to make another album. One that would take a step sideways in order to take a step forward; one that would be very personal and raw…in the making of this record, I made a deal with myself to trust my own voice and vision more than I ever have before, and to go willingly wherever it led.”

The title alone reflects his need to pen a great wealth of songs, as if the thoughts and inspiration took on a life of their own and just needed to come out. Recorded over the span of around six months in New Orleans, Los Angeles, and Catskill, NY, and clocking in at about 34 minutes, it’s a short but intense listening experience. Several songs are under two or three minutes long, but they pack vivid imagery into concise packages in a way that shows a significant diversion from the songwriting on his previous records. Slim keeps his record-making in the family with this release; longtime band member Malachi DeLorenzo co-produced the record along with Kenny Siegal, and DeLorenzo also mixed several tracks in addition to playing drums on the record.

Slim reflects truths that we may or may not want to admit; in “Life is Confusing”, he muses that “life is confusing, and people are insane”. He stands resolute in the face of trial: “…you could break my heart, but you’ll never break me,” he sings on “Never Break”. He calls upon the listener during this time fraught with challenges to unplug from the trajectory our culture has deemed is “right” and find strength in our own vulnerability, in our own instincts. “We look to our phones, drugs, sex whatever to find ourselves when it’s already right here,” Slim says. These songs join in the rallying call for the wild ones in us all.

The party starts at 8 with the Watson Twins (doors at 7). Head over to the Haw River Ballroom website to grab your tix now, it's going to be a special night in Saxapahaw.

Bio. via girlieaction.com
Posted by Jess at 11:18 AM