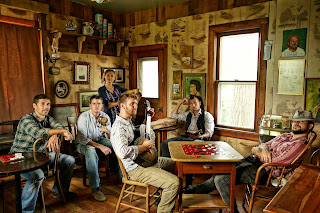 The immigrant rock band Scythian are making their way to the Triangle once again.  This Celtic-based band mixes rock, bluegrass, and Ameriana for a fresh and energetic sound that leaves everyone dancing.  Scythian is no stranger to the Triangle area, having made previous stops at Lincoln Theatre and bringing down the dance tent at IBMA's Bluegrass Festival, they will grace the Cat's Cradle stage this Saturday, November 15.

Almost immediatley following the Bluegrass Festival, Scythian headed to Ireland with 90 of their fans.  This trip was a celebration for ten years of making music, reaching fans, and creating a party everywhere they go. We caught up with Joey Crosby of the band to hear about their trip and find out what's next for Scythian.


The Triangle Beat:  What were some of the highlights of the Ireland trip?

Joey Crosby:  Our Ireland tour was magical. Traveling for a week with 90 of our fans, we played at some of the coolest venues in the country, including an undiscovered country dance hall called the Lake House in the wilds of the southwest coast.  It's mentioned in “Paint This Town” on the new album, so it was surreal to be able to bring our fans to a place we’ve been singing about all summer. Many people there, fans and locals alike, thought it was one of the best nights ever. Just an amazing event in an authentic old world setting with incredible people--including our friends in the Irish band, Socks in the Frying Pan. I'd love to return to the place, and it's also inspired us to think about doing a barn-storming tour in America.

We also played the Roísín Dubh, Galway’s storied music venue, where we were joined by the incredibly talented band and our good friends We Banjo 3. Sharon Shannon, the legendary Irish folk musician and button box player graciously joined us to surprise everyone by performing "Galway Girl," which she co-authored with Steve Earl.

We surprised our fans with a flash mob style surprise show on the ferry boat that crosses the River Shannon, all covered by a major radio station. So every day of the trip there was an expectation of surprises and a spirit of adventure. In Dublin, our gig was part of Amplify, Guinness’s annual music festival, which gave us some great exposure. I'd say there's a good chance we keep doing these trips.

TTB:  How do fans in the States differ from those in Ireland?

JC:  The Irish embraced our high-energy take on their traditions, merged with our gypsy and Americana influences. I think we brought them a reinvigoration of their own traditions. When Sharon Shannon came out on stage, the crowd in Galway went wild and we could tell people were amazed that such a national legend had joined. So we saw enthusiasm build, which gave us a ton of energy.

Our last show in Dublin at the Mercantile was packed to the brim with locals. We had a great opener with us there, Corner Boy, which definitely brought in a great crowd. Our new album has some Ireland-inspired songs on it, and it was invigorating that the Irish people have received our music so well. We made many new friends and of course the Irish were amazingly hospitable to us--a pleasure to work with and to entertain.

TTB:  How was your experience of playing the Bluegrass Festival in Raleigh?

JC:  We love playing in North Carolina. Much like the Irish people--and maybe even more so--Carolinians seem to have a true appreciation of roots music and music you can dance to. And they know how to dance, as a friend of ours from Wisconsin observed recently. So it was an electric atmosphere at the IBMA Dance Tent in October. The community of fans and artists that attends that festival is extraordinary, and we’re thrilled to be returning to the area with the Cat's Cradle show and are pumped about giving everyone a "shine-fueled, fiddle-flying hoedown," as the Bluegrass Situation graciously described our music.

TTB:   You all have been extremely busy with touring and recording.  What is the plan or next goal for the band?

JC:  After our Cat’s Cradle gig, our next stop is our annual show at Washington, DC’s 9:30 Club. DC is our home base, and this will be the first time many of our fans there have heard Jump at the Sun, our new album, live, so we’re ready to give them an incredible show in what is one of our favorite venues.

For more about Scythian, check out our previously posted interview with lead singer Danylo Fedoryka.  To see this magic live,  join us at Cat's Cradle this Saturday for a rip-roaring party. It's guarenteed to be a dance-filled night with Kaira Ba supporting and Scythian bringing it home.  Find ticket information and venue details at the Cat's Cradle website.