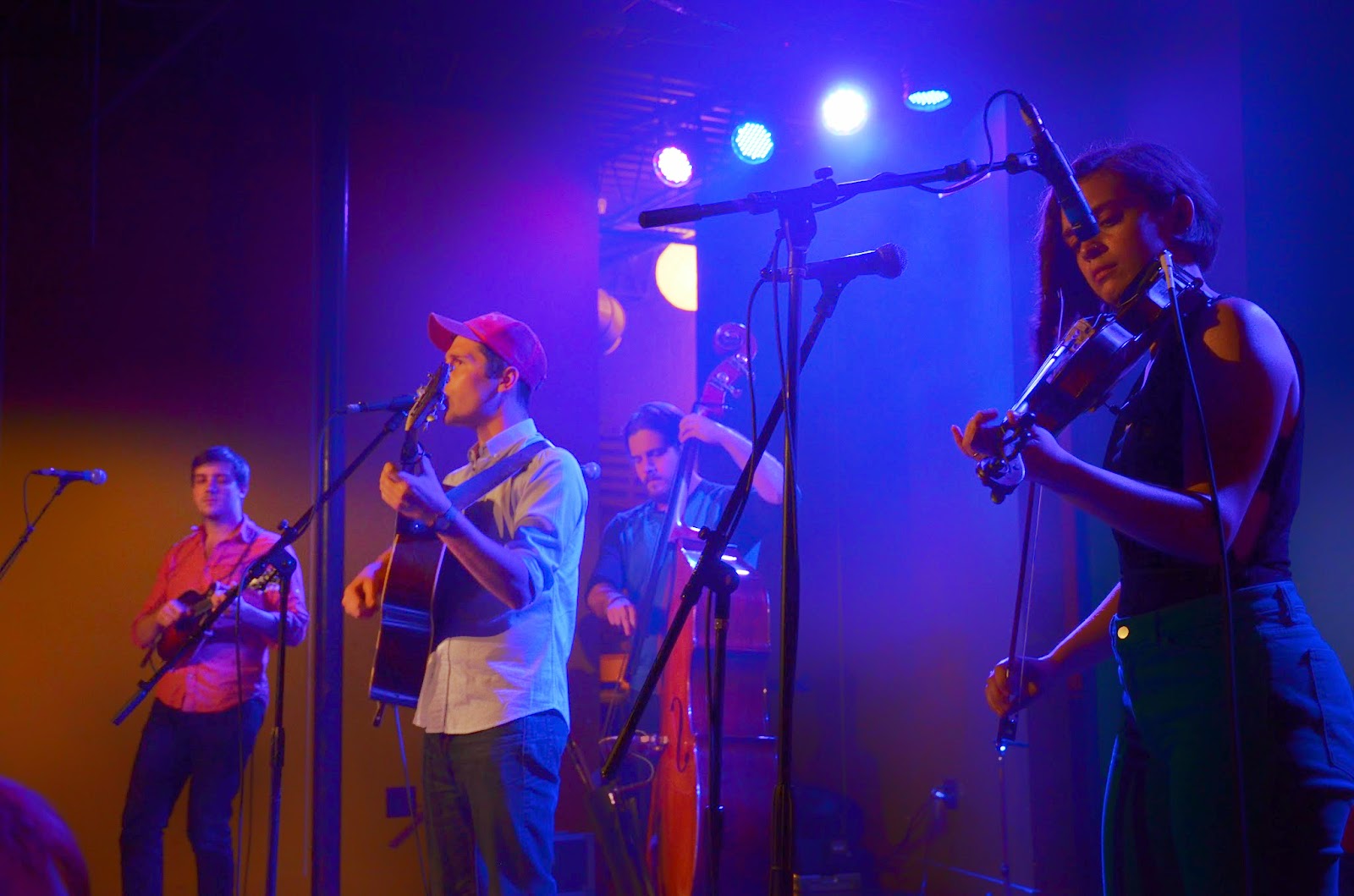 You might have been fortunate to see one of their three shows in Chapel Hill and Raleigh last week, or perhaps even witness band members Joseph Terrell and Libby Rodenbaugh win the Chris Austin Songwriting Contest just a year ago at MerleFest.  Whether you've seen them recently or never at all, Mipso is a band that is certainly poised for big things at this year's MerleFest.  Joining Terrell and Rodenbaugh are band members Jacob Sharp and Wood Robinson, who together form the Chapel Hill based Americana/folk band.  In a short span of two years, the group has released their first album titled, Dark Holler Pop, and embarked on a six week journey that took them to the far distant lands of Portland, ME and San Francisco, CA.  In part due to their recent success, Mipso is now set to make their MerleFest debut later this week.

During their recent visit to Chapel Hill, Mipso members, Libby and Jacob, were kind enough to sit down with The Triangle Beat to discuss the incredible journey the band has experienced in recent months and the excitement for what is yet to come.  Check out what Mipso had to say:

The Triangle Beat: Being from the Triangle, I know that UNC played a role in bringing the group together, but more specifically how did the group piece itself together to form Mipso?

Jacob: It first began when I met Joseph and we discovered that we shared similar musical interest without any aspirations of playing together. From there, Joseph, Libby and I all individually explored our own musical interests away from here before eventually getting asked to play music one night for a fundraiser at a frat house; the genre they wanted was bluegrass.  It wasn't something Wood, Joseph, nor I had set out to focus on, but we enjoyed playing that night, and that provided us with the desire to get better.

The Triangle Beat: At what point, do you feel it became clear to the band that Mipso was going to be successful?

Libby: I think it was somewhat gradual and also very clear for the group.  It was gradual that the band realized that people were enjoying our music and coming out very consistently, but our plan seemed almost planned for us in that we all graduated around the same time.  It seemed possible at that point that with our success and with our similar situations, I think there was a collective understanding that this was probably the best time for us to try and make it as a band.

The Triangle Beat: What has it been like for Mipso as you've gained success and experience in these past two years?

Jacob: It has been unique to start out as a group of people that just enjoyed music and now two years into it we have gained so much knowledge about being a band and also an understanding of the approach to touring, to life on the road, and how to maintain perspective of what is our purpose for the band as well.

The Triangle Beat: What was it like on your most recent tour which featured a lot of new venues for Mipso?

Libby: Well there were a lot of stops on this tour that we have never played before so there were a lot of people that had never heard us.  I found the most fulfilling aspect about this tour was that we were able to win people over at each stop along the way.  It may be a couple that was sitting in the front of a room that could connect with our music and that can be just as rewarding as having a full room.

The Triangle Beat: What is it like for the band to be just one year removed from winning the songwriting contest to now actually performing at this year's MerleFest?

Jacob: We will be performing twice Friday afternoon and again at the Midnight Jam on Saturday night. It is especially exciting for us and we have found that everyone knows about MerleFest no matter where we play. As festivals go, it is the start of festival season for many bands and there are 80,000 people that will be there, so for us it is exciting to think that this is our first time getting to experience the festival.

Libby: It seemed like every stop of the tour we were being introduced as performers at this year's Merlefest and that name is so meaningful in a way that we could have ever even realized.  It is also exciting for us to get to see other acts perform that we enjoy such as, Hot Rize, New Country Rehab, and Cahalen Morrison and Eli West.  I think that is a great part about MerleFest in that we get to see some of our friends perform in addition to being selected to play at such a wonderful festival in our own state.

The Triangle Beat: I've heard that you've been working on a new album while touring.  What should we expect from your new music?

Jacob: We are working with Andrew Marlin of Mandolin Orange on our newest record.  This time around he is working solely as our producer.  Jerry Brown owns the studio that we are producing in and he is working as the engineer.  In comparison to Dark Holler Pop, the distinction in sound is our new album is more rooted in being a string band that is focused on old-timey rhythmic sound.

Libby: The reason we say that it is more old-time is that we had an entirely different mentality, focusing more on groove based songs and featuring more melodic rhythms from the various string instruments that we play.

Jacob: One other distinction is that Dark Holler Pop featured a lot of the great musicians from our community in the Triangle and our newest album is more focused on just us with some assistance from Andrew and also Josh Oliver, but it is definitely more Mipso focused than our previous album.

As MerleFest 2015 is edging ever so closely, be sure to add Mipso to your Friday afternoon lineup.  Mipso will be performing at the Walker Center on Friday at 12 Noon, on the Cabin Stage from 6:20 - 6:45 and again on Saturday in the always entertaining Midnight Jam.  Following their MerleFest performance, be on the lookout for more information on upcoming shows in the Triangle and the release of their highly anticipated album.  Tickets for MerleFest are still available and can be purchased for the entire weekend or single day passes by visiting www.Merlefest.org. We'll see you there!