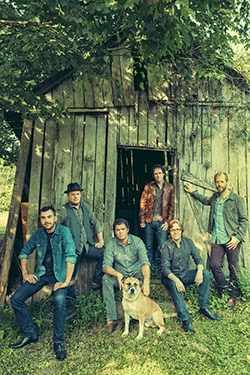 The always anticipated MerleFest is quickly approaching.  The fest that was started in 1988 focuses on "music, moments, and memories" created through the best folk, Americana, and Bluegrass music around. In preparation, we'll be spotlighting some bands from the lineup.  If you're unable to attend the festival on April 23-26, be sure to catch these notable acts during their individual tours.

Grammy and IBMA award winners, Steep Canyon Rangers will share their pickin' skills on Sunday on the Hillside Stage.  The group has been jammin' together for a dozen years now, gracing the stages of Carnegie Hall, the Telluride Bluegrass Festival, Cat's Cradle and the Orange Peel. They have also had the fortune of being joined by musician and comedian Steve Martin on numerous occasions. Their most recent collaboration is with Grammy-award winning Edie Brickell titled "Test of Time." Proceeds from this song will go to the Oskar Blues CAN'd Aid Foundation which focuses on giving back to the community.

Steep Canyon Rangers are currently putting the finishing touches on their new studio album produced by Dobro virtuoso Jerry Douglas. The new album will follow the "free wheeling and high-energy approach of their previous album, Tell the Ones I Love." Their high-energy records translate to energetic and interactive shows, combining the older traditions with modern appeal.

MerleFest is held on the campus of Wilkes Community College in Wilkesboro, NC.  Tickets are on sale now and may be purchased on their website. Visit for a day or stay for the weekend, but don't miss this foot-stompin' event.