Experience Landlady at The Pinhook 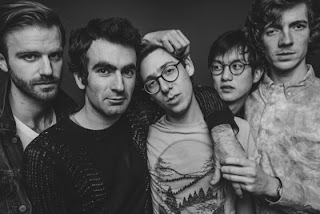 Tonight, the Pinhook is hosting quite a musical treat.  Brooklyn-based band, Landlady, will be playing with Buke and Gase and Durham's own Eric + Erica.  The show begins at 9 and tickets are $12 at the door.

Landlady released their debut album, Upright Behavior via Hometapes last July.  The album gained positive recognition from several music sources including Pitchfork.  They have also been noticed by some legendary artists, such as Wilco, who recently sent an encouraging email to their fans to purchase and support great music. They included a list of their recent favorite albums and Upright Behavior made the coveted list.  More recently, the band has released an EP titled, Heat.

Landlady played a set at last year's Hopscotch Festival and took the audience on a mystifying musical journey.  After a highly entertaining and comedic sound check, lead singer, Adam Schatz broke into "Under the Yard", singing of sheep, girls, and tomato seeds, and somehow it all made perfect sense.  The dramatically captivating lyrics meshed with the fierceness of the drums creating a show that was mesmerizing.  Few bands have the ability to reach  such an array of emotions, but Landlady exhibits every sentiment from laughter to sorrow to excitement.  Experiencing a Landlady show live is essential, no music bucket list is complete without it.

Check out Landlady's 2014 highlight reel from shows and festivals, including dates with Man Man, Rubblebucket, Sylvan Esso and more.