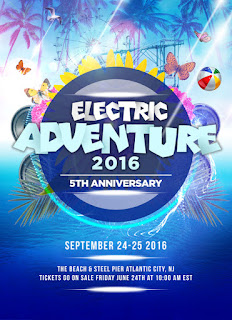 
For most, the month of September marks the end of another Summer filled with BBQs, roof-top parties, and the festival season. But just as you thought the season is over, Area Event is announcing the return of the one-of-a-kind Electric Adventure, the only music festival held on the sunny beaches of Atlantic City, for it’s fifth year anniversary bash on September 24 and 25, extending your time for fun in the sun just a little longer.

John Dimatteo, founder of Area Event says, “For 2016, Electric Adventure is taking the best parts of our 4 year history: the amusement rides, the beachfront location, and moving to a new festival site within Atlantic City adjacent to the world Famous Steel Pier. The Steel Pier will be accessible to all festival guests this weekend. The pier has a private entrance to the Ocean front beaches where you will find our stages, interactive areas, art installations, VIP Areas, additional concession areas, volleyball, hammocks, Lounge chairs and so much more for an all encompassing festival site."

EA FESTIVAL-GOERS SPOKE AND WE LISTENED

We asked last year’s festival attendees what their biggest gripes were and completely overhauled the event with their suggestions in mind to provide a better overall festival experience! This year’s event will boast several major improvements to address these concerns. 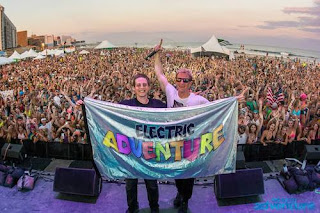 Electric Adventure’s prime location will also host a number of pre-parties and after-parties at the Jersey Shore’s numerous clubs, located just steps from the festival site. The presale will be released on June 24th at 10am and weekend passes start at a reasonable $99. Additionally ANYONE who purchased VIP Tickets last year will receive a 25% discount and no service fees for a 2016 VIP Ticket! Electric Adventure will unveil this year's talent and additional announcements in July and beyond, stay tuned!

About Electric Adventure:
What started in 2012 at Six Flags Great Adventure Theme park as a one day, one stage festival with only 6 artists and almost 6,000 attendees has turned into one of most celebrated electronic dance music festivals in the US. Due to its massive success, in just a year Electric Adventure saw a 300% increase in total attendance of over the two-day run. Since then, the festival has evolved even further, moving to Seaside Heights in 2014.

The artists featured on the talent roster over the years has grown exponentially as well, including star-studded names like Blasterjaxx, Disco Fries, DJ Snake, D.O.D., Dzeko & Torres, Flux Pavillion, GTA, Headhunterz, Noisecontrollers + many more. For 2015, EA moved to the casino town of Atlantic City. This time expanding to 6 stages with over 125 artists and top names like Kygo, Dillon Francis, Pretty Lights, G-Eazy and Big Gigantic. The festival attendance was the largest yet at nearly 20,000 patrons over August 1st and 2nd 2015. Mark your calendars and stay tuned for details and updates as they become available!