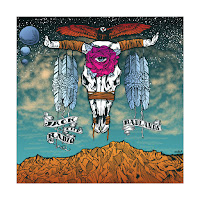 The album will be released as a limited pressing on 12-inch colored vinyl (in bone white or splatter blue). Each record will come with a digital download card, and the first 100 pre-orders will also include limited edition posters.

Jack the Radio has worked their way to the upper-tier of Triangle bands, playing some of the areas biggest stages with acts including Hall & Oates at Walnut Creek Amphitheatre, George Thorogood at Memorial Auditorium, and the Cold War Kids at Red Hat Ampitheatre.The band will celebrate the Badlands release at Lincoln Theatre on Friday, October 16th and have teamed up with Band Together, a volunteer-led non-profit organization, to give a portion of tickets sales to charity.Jack the Radio plays Lincoln Theatre Friday, October 16th, 2015 Doors 8 p.m. / Show 9 p.m. - Tickets $10 Adv / $15 DOS http://www.etix.com/ticket/p/8942715/jack-the-radioalbum-release-party-raleigh-lincoln-theatre

Check out the music video trailer for "Midnight" and see it live on October 16.