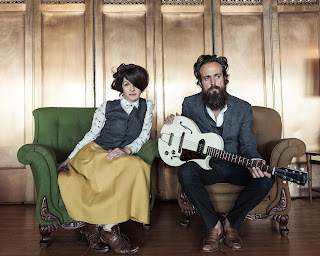 NPR Music says of the album, “Love Letter for Fire was, at least in part, inspired by the pair's desire to make songs that function as conversations rather than soliloquies, and their work backs that up...With the help of producer Tucker Martine and a smart, subtle band, the two achieve a fine balance — of songwriting sensibilities, of time in the spotlight — in the service of songs that feel at once fresh and timeless (see “First Listen” April 7th-15th).”

Sam Beam and Jesca Hoop’s 2016 headlining tour schedule in support of Love Letter for Fire has been extended through September. This includes a North American trek with support from Marlon Williams (May 17th-June 11th) and a European run (August 28th-September 11th). Sam and Jesca will also appear at End of the Road Festival weekender September 2nd-4th. Please find a current list of tour dates below.

Sam and Jesca recently released a short film on the making of Love Letter for Fire. The two discuss the process of how their collaborative album came to fruition and how two people not in love wrote an entire album of love songs. The clip also features exclusive performances of the two in a stripped down and intimate setting.

Sadly, their tour won't roll through North Carolina, but great music is always worth a road trip.  However, you can catch Sam Beam as Iron & Wine on August 13 at the North Carolina Art Museum.