With only one week until the start of MerleFest 2016, presented by Window World, the town of Wilkesboro, N.C. is buzzing with activity. Starting next Thursday, April 28, at 2:30 p.m., and running through Sunday, May 1, approximately 75,000 participants will gather at this annual homecoming of musicians and music lovers at Wilkes Community College for the nation’s largest celebration of American roots music.

With over 100 artists on 13 stages throughout the college, participants at MerleFest know to expect the unexpected. Late night jam sessions, band competitions, special guests onstage, impromptu dance parties and one-time-only musical collaborations are all a part of the fabric of MerleFest – and a testament to the enduring vision of Doc Watson and the Watson family. A key part of this vision is Doc’s idea of “traditional plus” music. Taking traditional Appalachian music as the base, “traditional plus” incorporates the many forms of American music that came from Appalachian roots and expanding to include blues, country, Americana, rock and bluegrass. Today this “traditional plus” spirit means that Americana star Jason Isbell will rub shoulders with young bluegrass visionary Sierra Hull or John Oates of famed rock duo Hall & Oates can jam with “newgrass” pioneer Sam Bush. As the nation’s largest roots and Americana festival, MerleFest has room for all those who treasure the American traditions.

“In addition to the spectrum of genres offered at MerleFest, this year’s lineup speaks to the quality of music offered at the festival,” said Steve Johnson, artist relations manager for MerleFest. “On our stages we’ll have many Grammy Award-winners or multi-Grammy Award-winners, Americana Music Award winners, Country Music Association winners, and International Bluegrass Music Association Award (IBMA) winners, among many other local, regional, songwriting and instrument awards. I know that awards are only one way of recognizing outstanding talent, but these associations and their members invest a lot in considering artists to select the best of the best each year.” 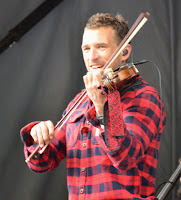 Like many performers at MerleFest, Dan Fedoryka, a founding member of the MerleFest fan favorite band Scythian, knows that performing at this festival is a chance to pay homage to the greats who came before. "We play festivals all over the country ranging from Celtic to roots festivals, and I can say that MerleFest holds a special place in our hearts,” Fedoryka said. “It’s here that our eyes were opened to the living tradition in music: we got to actually meet the greats that up until then had been beyond reach, almost mythical. There are many things that give you a sense of accomplishment in a musical career, but to meet the greats, to shake the hands of Doc Watson, Levon Helm and others is something that stays with you and makes a difference in how you move forward as a musician. This respect for tradition is palpable and seeps into the audience. After eight years at MerleFest, we can say that we feel like family with the attendees and have seen many children grow up before our eyes, a truly unique environment that just can't be found anywhere else."

The complete lineup and stage schedules are posted at merlefest.org/lineup and available on the MerleFest mobile app; festival updates are delivered via Twitter (@MerleFest) and Facebook. Use hashtag #MerleFest to connect with other festivalgoers on social media, and be sure to take a picture with Flattop, MerleFest’s raccoon mascot.