Merlefest 2016 was filled with some bipolar weather, but rain and chill will never get in the way of unforgettable music and a family-friendly atmosphere. For those who have been, they know that MerleFest isn't just a festival, it's a feeling, a happy memory, a piece of family that lingers even after May has arrived. There were several highlights of the weekend, both with music fans and well-known artists.  Here are a few of our favorite MerleFest moments.

Classic storyteller John Prine closed out night one of MerleFest.  Clad in a dark suit and tie, Prine spun his web of words intricately, with ease and wit between each carefully crafted tune.  Each song shared tales of his youth, adulthood mistakes, and life's lessons. Prine ended his set with memories of the late great Merle Haggard with the legend's "Ramblin' Fever."  All of MerleFest stopped to listen to these wise words as the stars shined and fans sunk into the euphoria that is MerleFest.

The Wood Brothers rocked the Hillside Stage with fans spanning all ages from 4-74.  The brothers provided a range of melodies with both acoustic and electric songs.  They joked that people wouldn't take them seriously when plugged in, but they couldn't resist the urge to rock - and rock they did.  Sharing hits from "Luckiest Man" to "The Muse," the set had fans feeling sentimental in one second and dancing the next. 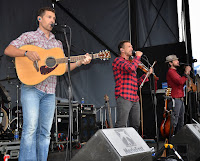 For those who have been to MerleFest in recent years, the Dance Tent has become synonymous with the Celtic roots band, Scythian.  That's not to say that other amazing bands don't play in the Dance Tent, but Scythian was made to rock that pavilion.  A Scythian show is filled with foot-stompin' music that hails from the band's Celtic heritage.  Scythian brings a fresh vibe to MerleFest while staying true to its family-friendly roots.  Excitement surges through the tent causing dancing, crowd-surfing, and pure happiness.  This group is a must-see, unless of course you're allergic to fun.

An exciting new discovery on the Americana Stage was the Canadian bluegrass band, Slocan Ramblers.  This group shared their very genuinely written tunes from their latest album, Coffee Creek.  Their show expressed thoughtfully written songs that evoked excitement, emotion, and energy.  Perhaps it was their youth, or the fact that they hail from Canada, but they seemed to bring something fresh to the bluegrass table that was genuinely welcomed by the entertained crowd.


There were so many stand-out moments and acts of MerleFest 2016 that 2017 is already being highly anticipated.  The vibe of this fest cannot be duplicated; the focus on family and exposure of new artists is unparallelled in this world of unlimited music festivals.  With this thought, we are looking forward to seeing what new acts will be discovered next year.