Moogfest Brings the Future to Durham

Moogfest presented its fifth edition in North Carolina and first year in Durham on May 19-22.  They promised a mix of "Future Thought" and "Future Sound," not only sharing futuristic electronic music, but also the influence of art and technology.  Spanning four days with an eclectic lineup of musical acts and icons, the festival did not disappoint.  Sprawled across the streets of downtown Durham in parking lots, pubs, hotels, and outdoor stages, technology exhibits and musicians lined the streets creating a musical playground.

One exhibit featured ODESZA on the podcast Song Exploder with host Hrishikesh Hirway.  This podcast allows the artist to dissect a song and describe the way it was created, piece by piece.  The members of ODESZA, Harrison Mills and Clayton Knight, discussed their song, "Kusanagi." The audience listened to various layers of the mysteriously enchanting song while the pair described how the sounds were created.  One sound that might not be easily identified by the average listener is the opening echo of children. This sound was pulled from an old Christmas album sang by children and chopped into the magnificence that is heard on the final recording, while other sound effects were created by simply tossing household items such as change against a table.  ODESZA shared that an after-thought of the song was realizing it's about longing for childhood, which can easily be felt when listening closely.  There are hundreds of music festivals across the world, but few offer such insight and the opportunity to hear the process of music such as Moogfest.


The Los Angeles trio HEALTH performed on the Motorco Park stage and blew the audience away with their noise rock sound. Sporting all black and brimming with high-energy, HEALTH brought electro-rock to the streets of Durham.  With John Famiglietti's long locks soaring through the air as he moved from rocking the bass to killing it on the synthesizer, the audience was engaged from the first note.  Add in frontman guitarist Jake Duzsik and drummer Jared Miller and the result is energetic rock with flowing electronics.  HEALTH shared songs both old and new resulting in a captivated and  pleased crowd.  This three-piece is quite unique and not easily classified, which should earn them a spot on everyone's music bucket list.

Grimes took to the main stage in Motorco Park on Friday night and completely owned it.  There are elements to a Grimes performance that lead the viewer to believe she is a full pop artist with back-up dancers and catchy lyrics, but Grimes is cutting edge in the electronic world.  She is the master of pulling in a variety of elements with her harp-like synths, intense visuals, and in-your-face performance.  Grimes' developed a  thoughtfully articulate show that demanded respect and appreciation from the crowd. 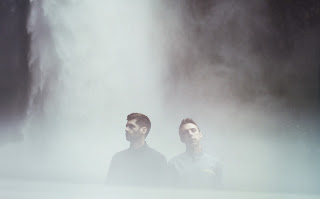 ODESZA followed Grimes on the Motorco Park Stage, bringing the aforementioned "Kusanagi" and many other songs to life.  As always, the members of the band entered the stage in a subtle way, allowing their music to speak for them. With hypnotic visuals dancing to celestial beats, the crowd was instantly entranced.  When a fan favorite was played, such as "Say My Name," the audience became one, swaying and singing as a single being.  In other moments, the crowd was sent into a dream-like state with bursts of lights, beating of the drums, and enchanting melodies.  ODESZA knows how to move a crowd in every possible way.


The real stand-out experiences of Moogfest were all of the little moments: pushing on fabric in Grimes' Realti display, playing with percussion in the exhibits, listening to a local DJ on the rooftop of the Durham Hotel, and dancing in the Armory into the morning hours.  Moogfest doesn't focus only on having a stellar lineup, its purpose is to celebrate the past, present and future of music, art, and technology.  This fest brings all of these elements together so that artists and fans alike have a platform to celebrate all things music.  The festival has already announced they will remain in the great Bull City of Durham next year, so stay tuned for details and mark your calendars for May 18-May 21, 2017.