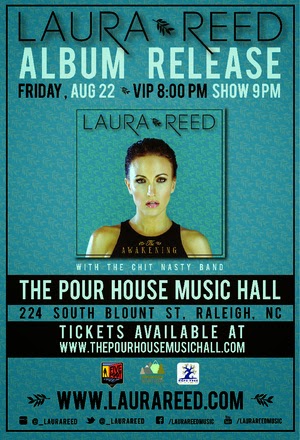 
Laura took to the studio in Nashville, TN with two time Grammy and Emmy award winning producer Shannon Sanders (India.Arie, Jonny Lang, John Legend, Robert Randolph) to construct what will surely be noted as one of the strongest solo debut efforts released in the past decade. The result is a stunning collection of ten candid and timely songs about love, unity and acceptance.  According to Reed and Sanders, the album was "slow cooked", having taken the time to properly marinade the many genres Laura has explored over her career.  Sanders finds himself drawing connections to his previous major successes, not only regarding her music, but also Laura’s gift as a performer. “After seeing Laura Reed live, I recognized a rare and unique authenticity and the presence of true SOUL in what was happening...I needed to be a part of it,” recalls the highly respected Neo-Soul pioneer.


The Awakening has already had an impressive liftoff, with the single “Wake Up” landing a feature on VH1’s “Hollywood Exes”, as well as being chosen by Alicia Keys for use in her major film production The Inevitable Defeat of Mister and Pete.


Laura’s journey has been well guided by mentors such as Paul Worley (Lady Antebellum/ The Band Perry/ Dixie Chicks) and Funk Legend George Clinton, who have worked alongside her as she toured the US relentlessly with her band Deep Pocket to support her previous release “Soul:Music”. Worley adds, “I don’t really have words to express how much I love Laura's music. It's real, it's authentic, it's what the world needs."  Certainly, Worley refers to the infectious and thought provoking lyricism of Reed, interwoven with a modern urban sound that seems to share valuable life lessons from a comfortable and humble soapbox of soul.

As a signed writer with EMI/Sony ATV, the acquisition of a booking contract with Madison House, and the development support of Hope Tree Entertainment the next year will surely find a large new audience discovering this truly unique and special artist.  Currently Laura Reed is preparing for her CD Release show at The Pour House with supporting artists, The Chit Nasty Band.  Tickets are $10/$12 and doors open at 8.