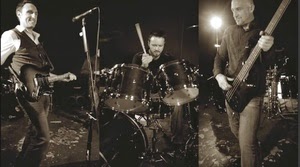 Home is a relative term for the members of Leeward Fate.  Each of the three members calls a different state home, but Raleigh is considered the gathering place for the band.  This is where they connect regularly to practice for shows and record new music.

Most recently, they gathered to record their third LP, No Ordinary Kind. In this latest LP, the band meshes sounds from blues, rock, pop and funk to create their own original sound.  Since the band formed in 2008 on the Leeward Islands in Saint Kitts, they have released three LP's and one EP, sharing their music on the East and West coasts.  Along the way, they gain new devoted fans that enjoy their energetic and thoughtful performances.

Daniel Nickels, Richard McCorkell, and Tom Miller return to Raleigh this Friday at the Deep South Bar with support from Mirror 7 and Flimsy.  The doors open at 7 and the fun begins at 9.

No Ordinary Kind is available at the band's website, iTunes, Amazon, and CDBaby.  Check out a single from the new album,  "Long White Robe" in the most recently released video.