Additional Artists Announced for the World of Bluegrass Festival 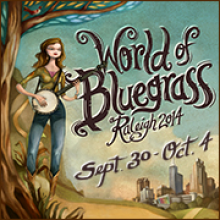 “We’re so pleased that, once again, Wide Open Bluegrass will present such a diverse, acclaimed lineup of artists at both Red Hat Amphitheater and the Raleigh Convention Center this fall,” said William Lewis, Executive Director of PineCone (the Piedmont Council of Traditional Music) and Wide Open Bluegrass producer. “And, in the weeks to come, we may have an additional guest or two to add to this esteemed roster.”

Performers for the free Street Festival portion of Wide Open Bluegrass will be announced in the coming months.