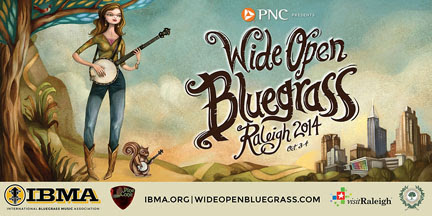 Visual artists and fine crafters interested in displaying their wares at the Wide Open Bluegrass Festival Art Market have until July 14, 2014 to submit their artwork for consideration. Complete guidelines and criteria are availble on the Artsplosure website: artsplosure.org; applicants are required to complete the application process online via entrythingy: http://artsplosure.org/get-involved/payment/entry-thingy/

Artsplosure will present The Art Market as part of Wide Open Bluegrass, a major public festival component of the International Bluegrass Music Association’s World of Bluegrass. The event is presented in partnership with IBMA, the City of Raleigh, Greater Raleigh Convention & Visitors Bureau, and PineCone-The Piedmont Council of Traditional Music. It will be held Friday, October 3 through Saturday, October 4, 2014.
The WOB Art Market is an intimate showcase, designed to recognize North Carolina’s talented and enthusiastic arts community and feature unique artisans from across the United States. Local artists and crafters, and those who sell works that will appeal to a music-loving audience, are encouraged to submit an application. The World of Bluegrass event will attract over 6,000 national and international traditional music performers, presenters, and fans — in addition to over 75,000 local attendees anticipated for the two-day Wide Open Bluegrass festival.

IBMA – the International Bluegrass Music Association – is the professional trade organization for the global bluegrass music community. The organization’s six-year stay in Raleigh is the result of a partnership with The Greater Raleigh Convention & Visitors Bureau, PineCone—The Piedmont Council of Traditional Music, the City of Raleigh and a local organizing committee.

Artsplosure is an independent nonprofit organization that has presented arts festivals in Raleigh since 1980.