Watching the most recently released video by Grouplove, "I'm With You," the energy and chemistry between the members reveals how the band's name came to be.  It would seem that this group's love has existed since childhood, however, the band originally developed after all members attended an artist residency in Crete in 2008. 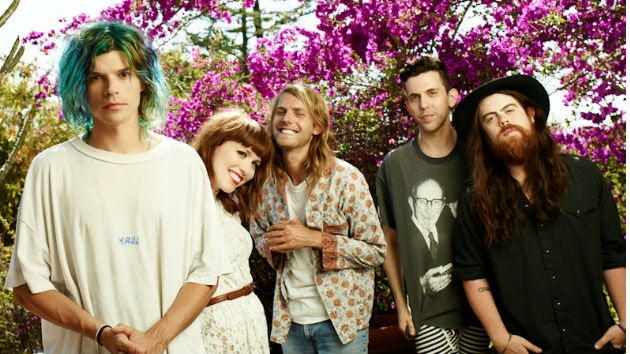 After meeting and spending a few weeks together in Greece, Hannah Hooper, Christian Zucconi, Sean Gadd, Ryan Rabin, and Andrew Wessen, decided to make some music together just for fun.  They gathered in Los Angeles and recorded an EP for nothing else but the love of music.  Unexpectedly, local music lovers quickly became Grouplove fans, and the demand to create more eclectic music transformed this group of friends into an official band.


Never Trust a Happy Song, the band's first full length album, was released in 2011.  "Colours" and "Tongue Tied" reached instant popularity with spots in commercials and TV shows.  "Tongue Tied" went platinum on the charts and quickly became the most recognizable song from the band.  The album is proof that not all music can be labeled under one genre.  According to guitarist, Andrew Wessen, the band pulls inspiration from all types of music ranging from the Pixies to 90's hip hop, and it can all be heard throughout the record.

With the success of their first album, Grouplove was asked to tour with Florence and the Machine, play with Foster the People, and join the lineup of some of the most respectable music festivals, such as Lollapalooza.  Among all of the touring, they managed to develop their second album, Spreading Rumours, in 2013.  From this album, "Ways to Go" was chosen to appear on the premiere of the HBO series, "Girls". 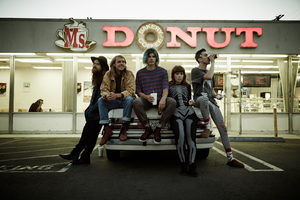 The success of the their two records has resulted in constant touring for the past 2 years, but according to Wessen, they wouldn't want it any other way.    They've had the fortune of performing all over the world; Japan, Australia, and Germany, just to name a few.  When asked about a highlight of this experience, Wessen recalls a show in a very small town in Germany: "We stayed on a reindeer farm and the venue had a stage that was too small to even fit all of our equipment.  We kept wondering why management had booked us there."  Eventually, the place was packed full of genuine music lovers that went crazy with excitement when Grouplove took the stage.  "The energy of those fans was unbelievable and made us realize why we do this and why we were booked at that unlikely place.  We had to play a triple encore because the people couldn't get enough!"  It's these moments that Wessen and the rest of the group are most thankful for; "meeting people and experiencing places" is a luxury that this hectic lifestyle allows.


Before Grouplove prepares to perform at Firefly, they'll be gracing the Haw River Ballroom stage.  They'll be joined by Sleeper Agent who is best known for their catchy and danceable tune, "Waves".  Tickets are $25 and can be purchased from the Haw River Ballroom website.  Doors open at 7 and the show begins at 8.  Check out Grouplove's energy in the "I'm With You" video below and rest up now for a big dance party this Wednesday!