Raleigh-based progressive rock band Triplicity has released their debut album, Triplicity, and are excited to share the new tunes at a few upcoming shows.  The first show is at The Pour House on September 20 with support from Absent Boundaries. Next week, Triplicity will take the Cat's Cradle stage for the Carrboro Music Festival.  Their stage time is Sunday, September 27 at 3. 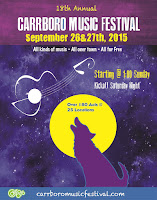 Triplicity creates their own unique genre, fusing original instrumental music with hard, classic, and progressive rock.  The result is an original sound that is far from comparison.  Bassist Frank Alexander states that one of the most important aspects in creating their music is, "the melodic approach each instrumentalist takes in crafting his part; the emphasis on combining elements of both classic rock (prog & otherwise) and more contemporary hard rock; and our willingness to embrace the compositional approach of mainstream songwriting in making a song tuneful in both form and feel."

Triplicity can be downloaded via Bandcamp.com.  Better yet, grab yourself a hard copy at one of their upcoming shows.  The Pour House show on September 20 begins at 8:30, tickets are $8 at the door.  Catch them again in Carrboro next Sunday, the 27th and experience these local artists live. Check out Triplicity being featured on The Setlist, complete with a live performance and interviews.