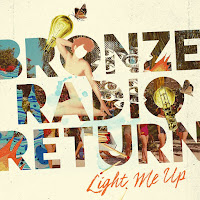 Bronze Radio Return has premiered their anticipated new album Light Me Up via Paste, ahead of its release on October 16th via DigSin. The 10-track LP is the band's best work yet, featuring songs jam-packed with memorable choruses, tender moments, a cinematic soundscape and the band's own undeniable spirit. Lead single and rousing title track "Light Me Up," recently premiered on KCRW.com. Be sure to catch the band illuminate the stage on their U.S. headlining tour, which kicks off on October 14th in Pittsburgh, PA, and wraps on December 13th at New York City's Bowery Ballroom.

Light Me Up demands to be listened to at full blast, infusing you with that undeniable urge to sing along. Bronze Radio Return is about to become your new favorite band...that is, if they aren't already.