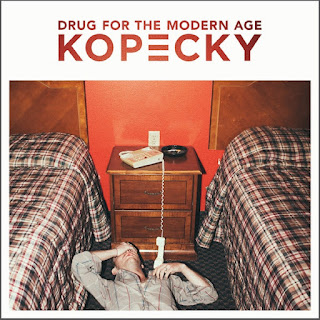 In Kopecky's new video for their latest single "Talk To Me", a cult run by vocalist/guitarist Gabe Simon consumes fellow singer Kelsey Kopecky and her family recruits Michael Ian Black to save her. Co-directed by Teddy Blanks and Alex Karpovsky from HBO's Girls, you can watch + share the cheeky new video courtesy of Funny or Die HERE.

"The story for the video developed when we first heard the lyrics of the chorus, 'Talk to me, tell me all your secrets cause I want to be everything you need,'" explained Karpovsky. "We immediately saw those words as being spoken by a charismatic cult leader to his followers. But the catchy, fun vibe of the song got in the way; we seem to have inadvertently created a very fun cult that gets to carry around cool light sculptures and dance their afternoons away next to a grand piano. Why would anyone want to escape a cult like that?"

"Talk To Me" is from Drug for the Modern Age, the second album from this Nashville-based six piece. The record takes the many shake-ups the band's endured over the past few years and turns them into inspiration for groove-driven, melody-heavy alt-pop that's intensely emotional and strangely exhilarating.

Formerly known as the Kopecky Family Band, the group looks at the effects of life-altering events on this record, such as the sudden loss of a loved one, divorce, and struggles with addiction, along with more joyful happenings like new love and marriage.

"Our goal was to talk about all these very serious things we were dealing with, but in a way that felt nothing like wallowing and more like standing triumphantly, or even dancing our way through it," Simon explained.

Fans can dance alongside the band on their upcoming tour dates, which can be found below.  Sadly, they won't be hitting the great state of North Carolina this time around, but stay tuned for more tour dates.