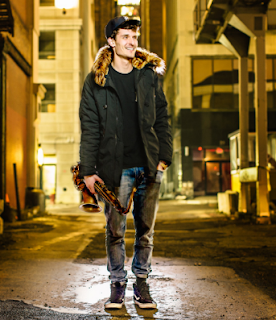 The Lincoln Theatre will be bouncing tonight with vibrant lights and rhythmic beats.  GRiZ has recently launched his Super Shagadelic Tour  and Raleigh is fortunate enough to be one of his stops.  GRiZ is promoting his fourth studio album, Say It Loud, released on his own record label, All Good Records.


GRiZ is known for infusing high-energy rhythm with soulful melodies and of course, the sweet sound of the saxophone.  It's obvious that GRiZ has been influenced by several genres of music, including hip-hop, soul, and blues.  He takes it one step further by layering these rhythms with dubstep, creating his own fresh flavor of funk.  The Triangle Beat had the pleasure of experiencing two GRiZ sets at Atlanta's Imagine Festival and that only makes us more excited to see what else he has to offer.

Joining GRiZ on tour are two impressive acts that are each quickly gaining attention in the EDM world, Big Wild and Muzzy Bearr.  Big Wild hails from Venice, CA and will be dropping beats with  both GRiZ and ODESZA this fall.  Just like GRiZ sets himself apart with his sax-playing skills, Big Wild lays down keys and drums on stage. The result of colliding these two worlds is a realm of colorful sounds and uptempo rhythms.  Big Wild most recently released"Aftergold" via Foreign Family Collective and has reached over 2.3 million streams on Soundcloud.  Join the masses and see what his music is all about:


Also supporting GRiZ is Muzzy Bearr, who is a part of the All Good Records fam.  This party is definitely more suited for the weekend, but you know what they say about the club on a Tuesday.  Join the fun at Lincoln Theatre on October 20 and call in sick on Wednesday, because this will be an unforgettable start to the week.  This is an 18 and over show with doors opening at 8, music at 9.
Posted by Jess at 10:35 AM