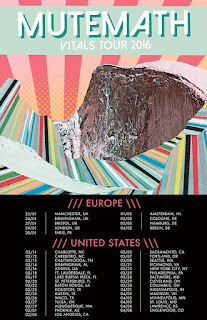 Great news, MUTEMATH will be making a stop at Cat's Cradle in February.  GRAMMY-nominated, alternative rock band MUTEMATH is excited to announce The VITALS Spring 2016 Tour! The run kicks off February 11th in Charlotte, NC and will make its way across the country until early April. VIP presale packages (which guarantee first entry into the venue each night, a commemorative ticket stub, a limited edition 2016 tour pin, and a digital copy of Vitals) available NOW on MUTEMATH.COM and general on sale begins Friday, October 30th. Full tour routing and more details can be found below!

In other exciting tour news - the band is asking their fans to get involved by creating their dream setlist for the spring tour by clicking HERE and adding their favorite MUTEMATH tracks to this collaborative Spotify playlist. The guys plan to build their setlist every night based on fan suggestions and will update "Last Night's Setlist" [https://open.spotify.com/user/mutemathofficial/playlist/3aykms1pABB8PolUVk32Cp] after every show so listeners can see what songs were chosen!