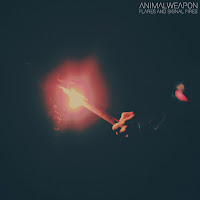 Now that we've almost survived all of the fun that October has to offer (Bluegrass Fest, anyone?), it's time to start making the music schedule for November.  Mark your calendar for November 7 for Animalweapon's EP Release Show with Youma and Frank Kastle Bin Savage. The party's going down at Kings starting at 9.

Patrick Cortes is Animalweapon, an electronic artist who's preparing to release his new EP, Flares and Signal Fires.  The EP contains five original tracks complete with wistful lyrics. Cortes stated that he doesn't always have a direct muse when creating his music, but some tough times in recent months have unintentionally inspired much of this EP, "It wound up being a much more personal record than anything else I've done until now."

In addition to life being a strong influence, Cortes is also inspired by a large array of musicians.  Top on his list are Trent Reznor and Radiohead, but he tends to collect bits and pieces from all types of artists and a variety of genres, "I feel like I wear my influences on my sleeve and I'm kind of alright with that."

Cortes sees this EP release as only the beginning as he looks brightly into the future. He's interested in branching out and not only staying in one musical world, "I'm also playing around with some of my rapper and producer friends for a hip hop project, which I anticipate will be the most fun I'll ever have making music." Cortes is planning several regional shows as well as a tour next year, which he finds both terrifying and exciting, understandably.

Take a listen to "Turn the Lights Down" and see it live at Kings on November 7.  The always entertaining Youma and Frank Kastle Bin Savage will be supporting the show, making it one memorable Saturday night.

*cover art and photography credit:  Kristen Abigail and Blake T. Brady
Posted by Jess at 11:54 AM