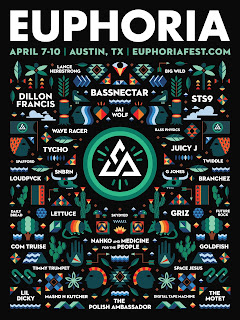 Austin's Euphoria Festival celebrates its 5th Anniversary this year and promises a superior lineup. The most recent addition to the bill are the English progressive trance masters Above & Beyond.  The headliners include some heavy hitters such as, Bass Nectar, Dillon Francis and STS9.


This four day event offers a variety of camping options and multiple stages with tickets starting at the very affordable price of $119.  Head on over to the Euphoria Festival website for camping and ticket information.  Stay tuned for updates, we've got you covered.  In the meantime, get lost in the video below to see what it's like to experience Euphoria.