Since The Ritz Raleigh was purchased by Live Nation in the fall of 2014, the venue has experienced a much needed and noticeable makeover that is attracting better known artists to the Triangle.  While Raleigh has no shortage of local talent to keep live music enthusiasts content, the Ritz Raleigh has welcomed acts that traditionally would have bypassed the state's capital for the more established Fillmore in Charlotte, also owned and operated by Live Nation.  If you've been waiting to check out the new and improved Ritz or if you're looking for an opportunity to return, we are here to highlight one of the upcoming shows that is guaranteed to be an unforgettable night! 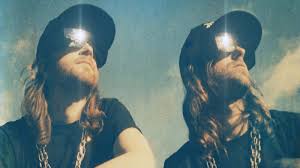 On Tuesday night the rocktronica duo of Mike Stroud and Evan Mast, better known as Ratatat, will be stopping in to play alongside Jackson and His Computer Band. Based out of Brooklyn, NY, a live Ratatat performance is certain to be unlike any other show you've ever experienced.  From Stroud's masterful guitar playing to the tightly orchestrated beats and graphics provided by Mast, the energy in The Ritz is one you'll not want to miss.  Most recently the XL Recording duo released their first album in five years, Magnifique, after performing at major festivals in 2015 such as Coachella and Governor's Ball in NY.  The show is set to start at 8pm and tickets are still available at LiveNation.com.  For a preview of the funky good time to be had on Tuesday, check out "Cream of Chrome," from their newest album.  Get your tickets now and we'll see you there, Raleigh!

Email ThisBlogThis!Share to TwitterShare to FacebookShare to Pinterest
Labels: Jackson and His Computer Band, Live Nation, Magnifique, Ratatat, The Ritz, The Ritz Raliegh