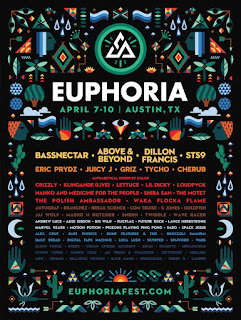 Check out the official Euphoria full lineup video below:

This year, Euphoria will be opening the gates a day early to allow campers to get settled in and stake claim on their home for the next four days. With this added day comes the Thursday night New Moon Pre-Party in celebration of the first phase of the Euphoria family’s return back to Carson Creek Ranch. The New Moon Pre-Party will be exclusive to all four-day campers and will feature a special set by The Polish Ambassador.
“We are excited to get the Euphoria Family back home and in the gates a day early," says festival producer Mitch Morales. “I couldn’t think of a better way to kick off the weekend than with the New Moon Pre-Party."
To purchase tickets and see the complete lineup, visit the Euphoria Music Festival website.