It's time to start gearing up for North Carolina's most coveted celebration of music: MerleFest 2016. This homage to bluegrass, Americana and folk music will take place from April 28 to May 1 on the campus of Wilkes Community College in Wilkesboro, N.C., where artists such as John Prine, Old Crow Medicine Show, Jason Isbell, Brandi Carlile, The Wood Brothers, and The Steep Canyon Rangers will perform. 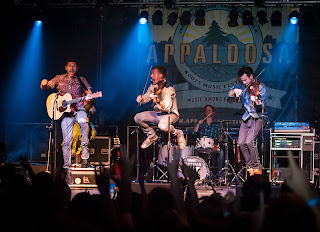 Performing Friday, Saturday, and Sunday at the festival, Scythian promises to deliver an exciting set on each stage, including the dance tent.  The band is highly anticipating their return to MerleFest; guitarist and vocalist Dan Fedoryka states, "...we're looking forward to coming back to the fest we feel is a second home to us in a state we love. We have to say, it's also a fest where we feel the love. We've never experienced such positive interactions with attendees and every year we leave reinvigorated and convinced that we're musically on the right path. What can I say, there's no place like MerleFest!"

Scythian has spent the last year touring in support of their latest album, Old Tin Can. In April, ahead of MerleFest, the band will release their album in the land that inspired them, Ireland.  They take touring to a whole new level by inviting 180 of their fans to join them while performing at various Irish hot spots for eight days of barn-stomping fun. To learn more about this traveling party, visit Scythian's website.

Scythian's next North Carolina show will be played at Blind Tiger in Greensboro on March 11.  This is just in time to celebrate St. Patrick's day with a band immersed in authentic Irish tradition.

We'll keep you posted on specific play times and locations for Scythian as MerleFest gets closer.  Visit the festival's website to purchase tickets and for lineup details.
Posted by Jess at 9:52 AM