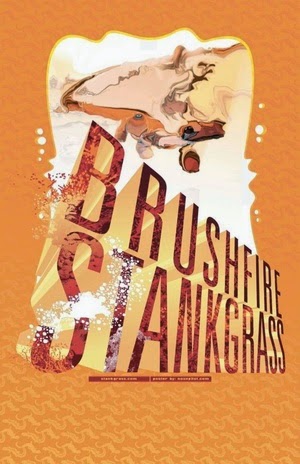 This Saturday, tons of locals will gather in Moore Square for the World Beer Fest.  The Pour House is making sure that there is no need for the party to stop there.  Starting at 4 (doors at 3), this always rockin' venue will host the free Beer Fest After Party with Crank Arm Brewing Company beer on special.  Check out the performing bands and times below:

Headlining the show is Asheville's own Brushfire Stankgrass.  The group mixes electronic music with jazz and bluegrass to create a completely unique sound.  They spend a lot of time touring through the south and sharing their sound with new audiences. Brushfire Stankgrass is known for energetic performances that keep people coming back for more.  The group is comprised of Ben Saylor (banjo, vocals), Will Saylor (guitar), Danny Iannucci (bass), and Micah Thomas (drums).  The Triangle Beat spoke with Brushfire's Ben Saylor about the band's success and future goals.

TTB:  How did the band come together?

SAYLOR:  Will and I have been picking together since we were very young. Our mom was a violin teacher, so we each started violin at the age of three. From there, we picked up banjo and guitar at the ages of 10 & 12.  We started to pick up bluegrass gigs in the early 2000's and our own original act sort of spun out from there.  We added a drummer in 2005.  Micah has been with the band since about 2008.  Danny joined full time late last year.


TTB:  Who are the strongest musical influences of the band?

SAYLOR:  A great variety of influences are reflected in our music.  If I had to pick a songwriting influence it'd probably be John Hartford.  Our rhythm section is strongly influenced by jazz fusion artists like Weather Report.  Will displays a large southern rock influence on guitar, along with flat picking bluegrass heroes like Tony Rice.  A lot of unexpected influences play in - we listen to a tremendous amount of classic hip-hop and even electronica.

TTB:  Who would be the ultimate artist for you to tour with?


SAYLOR:  Teaming with an established act like Railroad Earth and Yonder Mountain would be ideal for what we're trying to accomplish.  Down the road, it'd be great to show up on some festival bills with some of the big names that are touring right now, like Outkast.

TTB:  Who is the main songwriter for the group?  What is your process for songwriting?
SAYLOR: I am the main writer.  Songwriting comes at different times, sometimes after hours of playing music, sometimes instantaneously.  Lately I have been writing a lot of music using voice memos on my phone while driving.  It's a great way to capture lyrics or melodies that pop into my head.  I've written entire songs by compiling voice memo journal entries.

TTB: What would you like the public to know about you and your music?

SAYLOR:  We have an awesome live show.  We really take pride in distinguishing our music from other "newgrass/jam" groups that are on the scene today.  Some of the sounds we create using Moog analog electronic effects on our instruments are extremely unique.  Some of the effects I run my banjo through are "firsts" for the banjo.  Ultimately we want people to come expecting a groundbreaking experience at the live show, while simultaneously expecting to hear some great songwriting. And lots of improv, of course.

TTB:  What are your goals and hopes for your future as musicians? What will come next for Brushfire Stankgrass?

SAYLOR:  We want to play festivals.  Lots of them.  Other than that, we're hard at work on our next studio album and we hope to continue to craft award-winning albums that we can be proud of that change the course of musical history.  Our new album just spent its third month in the top ten on Relix/Jambands.com!

Brushfire's latest album, Microclimates, can be purchased now on their website.  As stated in a recent press release from the group about the album:

This carefully crafted studio release makes use of many layers of sound, including strings, horns,
and even some field-recorded nature sounds like crickets, cicadas, and thunderstorms from
Southern Appalachia.  There's even somewhat of an environmental call to action theme
throughout the lyrics: "I don't want to have my bones lying in the sand of some alien looking
landscape, it's worth it for our sake to change." The use of analog electronic processors for banjo
and guitar, the electronic effects never before used on a banjo, help to create their very distinct
sound.  Microclimates was self-produced, and features several locally well-known musicians,
including an appearance by Phillip Barker of Town Mountain.


Brushfire Stankgrass will take the stage around 10:30 this Saturday. Come out to The Pour House for a full day of sun, great music, and tasty beer.  Don't forget, it's a free event, so that leaves more money for beer!