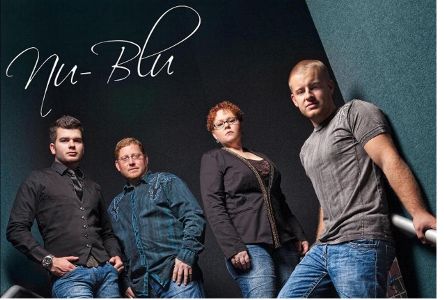 The Triangle Beat is excited to announce we will be covering Merlefest 2014 live on Friday, April 25.  This year's lineup promises to be one that you don't want to miss, so get your tickets now at www.merlefest.org.

In anticipation of the start of the four day festival, The Triangle Beat will be spotlighting several area bands performing next week.  Our first feature is on the Siler City based bluegrass band, Nu-Blu.  The band features Carolyn Routh on vocals and bass, Daniel Routh on guitar, Levi Austin on banjo, and Austin Koerner on the mandolin. In a recent interview, Carolyn spoke with The Triangle Beat about the band's own excitement to be playing Merlefest.

The Triangle Beat: Is this the first time for Nu-Blu playing at Merlefest?

Carolyn: This is our first time playing Merlefest and as the landmark bluegrass festival of North Carolina, we are very excited to be a part of this year's lineup.  We will actually be performing twice on Friday, once on the Americana Stage from 12:15-1pm and again on the Plaza Stage from 6:15-6:45.

TTB: As North Carolinians, how did Nu Blu get started and where did the name of the band come from?

Carolyn: Growing up I always had a love for music.  I remember as a young girl when other girls were doodling their names in notebooks, I was doodling song names and band names that I thought sounded good.  One of those names just happened to be Nu Blu.  At the time I was not a bluegrass fan, but as my love for music continued, it would end up being a perfect name for what is now our band.

As for the members of the band, I met Daniel, who is now my husband, in late December of 2000.  We shared in our love for music and ambition to make a career out of playing music from the beginning. After playing local street festivals and small town venues for the first few years, we added Levi to the group in 2006, who was only 14 years old at the time.  As we continued playing, Austin began filling in as our mandolin player only to become full time soon after.

TTB:  Playing at events like Merlefest, it is great exposure to people who might not have heard your music before.  What do you hope for someone to take away from hearing Nu-Blu play?

Carolyn:  For me personally, I feel like some people have a perception that all bluegrass music is the same and that turns them away from actually listening to the music.  With this in mind, we want those fans to be able to say, "You know I've never really liked bluegrass, but I really like what you are doing." At the end of the day, we don't want to be defined by a genre.  If a fan is enjoying the music, it doesn't really matter what genre it is.

TTB:  What are the goals Nu-Blu has moving forward as a band?  Can we expect another album soon?

Carolyn:   We are in a great place as a band right now.  Playing professionally has allowed us to make so many great connections and provided us with opportunities that you could never anticipate.  For example, we just played our first show on the gulf coast and we've now played all over the country and even Canada.  With this success, we hope to continue to mature both as a band and in the sound that we create.

TTB:  What can listeners expect to hear from the new album compared to previous recordings?

Carolyn:  Well with this album, we didn't really try to be different in our approach to the music but I think the maturity of the band allows for a different sound and emotional experience for listeners than previous recordings.  For me personally, it is all about creating an emotional experience for the individual and with the collection of songs we have selected for this album, I think it will be one that can provide that for our listeners.

If you plan on making it to the festival this year, make sure to add Nu-Blu to the list of bands you need to check out.  Prior to the festival, you can get a preview of Nu-Blu and additional information by going to their website at www.nu-blu.com.  Stay tuned for more band spotlights leading up to the start of Merlefest 2014 and we'll see you there.