The PNC Arena was packed in April to see Eric Church take the stage, but those who saw JD McPherson get the night started were certainly rewarded for their early presence.  An up and coming artist from Broken Arrow, OK, McPherson engages listeners in a sound that hints at 1950's rock and roll, but maintains an appeal of the modern era.  Coming off of a successful tour throughout Europe, JD returned to join the likes of the previously mentioned Eric Church as well as Robert Plant on their tours this spring.  If performing alongside these names isn't enough evidence of the success McPherson is having, JD was also featured in a recent issue of Rolling Stone magazine for the release of his newest album, Let The Good Times Roll.

Eric Church, one of today's most popular country music artists, helped write some of the music that is featured on the newest album and had the following to say about McPherson: 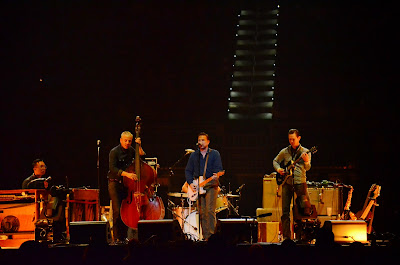 For more on JD McPherson, be sure to check out the rest of the article from Rolling Stones.  Let The Good Times Roll was released in early February and is available for purchase by visiting his website or  iTunes.  The title track from the album, "Let The Good Times Roll," has gotten McPherson a considerable amount of recognition in just a matter of months and even landed him a spot on the David Letterman show back in February.  Check out the live performance below and be on the lookout for more from JD McPherson.