The Midtown Bluegrass Series Kicks Off With The Vickie Vaughn Band 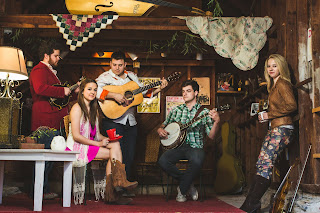 The Midtown Bluegrass Series: Sunday Ramble in the Park continues on Sunday, May 17 with a free concert by the Vickie Vaughn Band. The music starts at 5 p.m., but come out early for special music-themed kids' activities - this month, starting at 4 p.m., local musicians Lynda Dawson & Jamie Dawson will facilitate a youth jam for school-aged students who play fiddle, guitar, mandolin, banjo, and bass! Lynda also teaches the popular songwriting sessions at PineCone's Bluegrass Camps for Youth, and she'll be one of the instructors at the NEW Bluegrass Jam Camp in Cary Aug. 10-14!

Centered on powerful vocals and poignant songwriting, the Vickie Vaughn Band serves a unique brand of bluegrass that blends tradition with youthful funk and energy. Their sets engage a wide variety of audiences by combining the songs of artists such as Bill Monroe, Cat Stevens, Bob Dylan, and John Prine with originals and classic instrumentals. They are among the 30 bands selected by IBMA as part of this year's official Bluegrass Ramble showcases during the World of Bluegrass - get a sneak preview of this exciting band for free in North Hills! Last year, they were nominated for the IBMA Momentum Award for Band of the Year, and they are keeping the momentum this year!
Their debut EP, produced by Grammy-winner Ronnie McCoury, is scheduled for release this month. And they have another full season of touring ahead, with key stops at Delfest in Cumbelrand, MD and another appearance at ROMP. When not on the road, you can find the band playing at their usual haunts in Nashville— The Station Inn, Music City Roots and The Country Music Hall of Fame. The funky yet traditional five piece band is led by the big-voiced, bass playing western Kentucky native Vaughn. Her band is stellar and well rounded with Justin Hiltner’s innovative arch-top banjo styling, mandolinist Casey Cambell’s blend of creativity and tradition, fast-fingered guitarist Zach White, and the tasty fiddling of Maggie White.

The Midtown Bluegrss Series concerts welcome old and young alike, featuring the best of bluegrass with popular string band music. With its unique combination of gospel, country, and blues, that iconic “high lonesome sound” has deep rooted ties in the Tarheel state. Concert guests are invited to relax on the grassy lawn of Midtown Park and enjoy family and friends on Sunday afternoons. Live acoustic music will fill the air at six concerts, held monthly, April through June and August through October (there will not be a July concert). Southern BBQ and craft beer will round out the event. Lawn chairs, blankets, and coolers are welcome at these events!  Please do not bring outside alcoholic beverages – there will be beverages available for purchase at the concert.

This series of free concerts is sponsored by PNC with additional support from beverage sponsor Bud Light. This is the second year that PineCone and Midtown Events have partnered to bring a series of bluegrass concerts to North Hills.
Other artists who will perform this season include:
All concerts begin at 5 p.m. and are FREE and open to the public. At 4 p.m., bring the kids out early for special activities designed to appeal particularly to kids and families!

*Information courtesy of PineCone
Posted by Jess at 1:56 PM