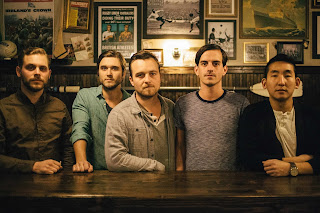 Celebrated Seattle quintet Ivan & Alyosha will perform at Local 506 on Saturday, May 30 in support of the release of their sophomore album, It’s All Just Pretend, available now via Dualtone Music. Listen to The Wall Street Journal exclusive album premiere HERE.
The album’s lead single “All This Wandering Around” was recently featured as KCRW’s Today’s Top Tune and has already been played on some of the key, tastemaker Triple A stations in the country, including WXRT (Chicago), KEXP (Seattle), WXPN (Philadelphia) and KGSR (Austin). Paste Magazine said of the track, "The song stands out from the very opening notes, but its message is as captivating as its melody." Check out the Entertainment Weekly exclusive video premiere HERE.


It’s All Just Pretend is the follow up to the band’s acclaimed 2013 debut LP All The Times We Had. The album received great support from the press, including NPR Music, Filter, American Songwriter, Paste Magazine and USA Today, who said, “[a] sound as filled with hope as it is harmony. These songs are sheer joy, from their melodic surface to deep inside their lyrical core.”
Ivan & Alyosha is: Tim Wilson (lead vox, guitar), Ryan Carbary (guitar, piano). Tim Kim (guitar), Pete Wilson (bass) and Cole Mauro (drums).
See for yourself why Ivan & Alyosha are getting so much attention.  Join us at Local 506 this Saturday, May 30 to experience this talented band live.  The show starts at 8:30 with the support of Kris Orlowski.


*Information courtesy of All Eyes Media
Posted by Jess at 8:44 AM