You might not have heard of them yet, but you certainly will.  Lake Street Dive is currently on the road promoting their new album, Bad Self Portraits, and are making a stop at Cat's Cradle on Valentine's Day. 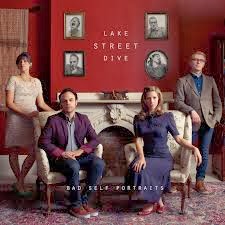 The smoky voice of Rachel Price paired with a mixture of jazz, soul, rock, and pop is intoxicating and unforgettable.  This sound did not come naturally to the band though, it took years of trial-and-error and experimentation to settle on this indie-pop sensation that is Lake Street Dive.

Their time together started at The New England Conservatory where all members where intensely studying jazz.  The group is comprised of drummer, Mike Calabrese, bassist, Bridget Kearney, vocalist, Rachel Price, and Mike "McDuck" Olson alternating between the trumpet and guitar.  As bassist, Kearney tells the story, McDuck gathered the group in a classroom where he scrolled "Lake Street Dive" on the chalkboard and stated, "We are a band. We are Lake Street Dive."  That was the beginning of an adventure that has taken them from You Tube fame, to playing along side the Avett Brothers, and most recently, performing on The Colbert Report.

The band's raw talent is going to take them to successful places in the future, but the internet is largely responsible for helping them get noticed on a larger scale.  The video of the group's sultry jazz cover of The Jackson 5's,"I Want You Back" has received more than 1.4 million views.  It led to Kevin Bacon tweeting, "This is amazing! Gives me chills", along with a link to the video to all of this followers.  Lake Street Dive quickly gained buzz with fans only wanting more.

Since then, the band has developed their new album, Bad Self Portraits, which will be released on February 18. Bassist Bridget Kearney took the time to answer a few questions and discuss the path that has led them to where they are now and where they hope to be ten years from now.

TTB:  Where does the name Lake Street Dive come from?

KEARNEY:  McDuck grew up in Minneapolis, where Lake Street is a bustling hub of dive bars.  McDuck envisioned us playing the kind of music you might hear at one of those dive bars.

KEARNEY:  Yes, we've learned a lot in our nearly ten years of band-om.  We're basically just following our ears to the sounds we want to be creating, which in concrete terms has meant moving towards a dancier, funkier sound with a lot more vocals in it.

TTB: Who are your strongest musical influences?

KEARNEY:  The Beatles and the great pop soul bands from Motown and Stax Records in the 60's.

TTB:  What has been that defining moment in the past year that has made you feel like you're an integral part of the music world?

TTB:  Is there a main songwriter for Lake Street Dive, or is it a group effort?

KEARNEY:  We don't have a main songwriter, all four of us write for the band.  We try to learn as many of each of our songs as we can and when it comes time to record, we collectively pick the batch of songs that we want to include.

TTB: What are the positives and negatives of touring?

KEARNEY:  There are a lot of practical issues of touring...like not sleeping in your own bed, being away from loved ones, rattling your days away in a van.  But the shows make it all worth while, that's why we do it.

TTB: Have you adjusted to having followers and fans?  What is your reaction to being in the spotlight?

KEARNEY:  In the old days we'd get to be personal friends with our fans because there were so few of them!  We can't do that anymore, which is sad.  But I still like meeting people who like our music because that probably means that we have shared tastes and sensibilities.  We have a lot of really nice fans!

TTB:  What do you want people to know most about Lake Street Dive?

KEARNEY:  None of us are dating!

TTB:  What are the long term hopes and goals for the band?

KEARNEY:  We'd like to make music together for another ten years and we want each album to be better than the last. 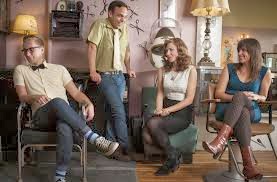 Lake Street Dive had their first TV appearance on Wednesday, February 8 on The Colbert Report.  To see their stellar performance and to get a sneak peak of their album, check it out online.

They will perform this Friday, February 14, at Cat's Cradle in Carrboro.  Opening for the band will be Miss. Tess and the Talkbacks. To preorder the new album, go to the Lake Street Dive website.