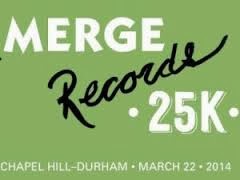 Electric pop duo, Vertical Scratchers, is comprised of John Schmersal and Christian Beaulieu. The pair will be releasing their debut album, Daughter of Everything, on February 25.  The entire album and intriguing artwork can be streamed now via Pitchfork Advance

The group is hopping in a van in March to promote their new album.  They will join The Love Language at the Merge 25K finish line on March 22, which is a free concert to celebrate twenty-five musical years of Merge Records.

What can be expected from this debut album?  According to John Schmersal via Merge Records:

Simplicity was the inspiration: get in the van, rehearse in the van, tour in the van, stay mobile. “I have played in a lot of bands with complicated set-ups and implemented technologies,” says John. “I also do a lot of recording and editing on computers, so part of the desire for simplicity was about wanting things to be as organic and in real time as possible.” This impulse to keep things moving is reflected in the songs themselves. Most Vertical Scratchers songs clock in under the two-minute mark but often go in twice as many directions as your average-length song. Pop deception. Think the Kinks with a Buzzcocks brevity.

Registration is still open to run the Merge 25K, or you can simply join the label for an amazing afternoon of music following the race. For registration information and event details, visit their website.