Lincoln Theatre is about to get trippy.  Former Three 6 Mafia member, Juicy J, announces that he will make a stop in Raleigh with his Never Been Sober Tour.  Travi$ Scott will join him on stage. 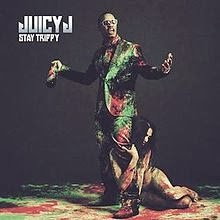 Juicy J recently completed his Stay Trippy Tour which featured A$AP Ferg as an opening act.  His first solo album with Columbia Records, Stay Trippy, sold 64,000 copies in its first week and debuted at number 4 on the Billboard 200.  The most popular songs from the album are "Bandz a Make Her Dance", "Bounce It" and "Show Out."

Juicy J is expected to release his sophomore album some time this year.  Tickets go on sale Friday, January 24th for the February 28th show.  Get ticket information here.

Here's just some of what you can expect at the Juicy J show at Lincoln Theatre: