Rob and Jordan Nance Perform at The Pour House


It's pretty impossible to feel stressed or overwhelmed when listening to the country-folk sounds of Rob and Jordan Nance.  The pair hail from Spruce Pine, North Carolina, a small town near Boone, where sounds of Bluegrass and Americana are as natural as the mountains surrounding them. 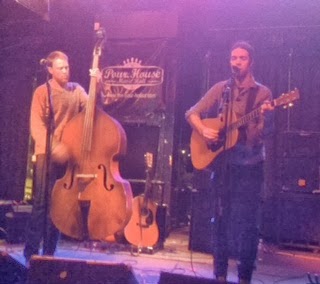 Rob Nance's sound has evolved since he started on his musical journey.  His first EP, Wake Up and Smile was mainly acoustic based, while the latest album, Lost Souls and Locked Doors, combines the sounds of bass, guitar, drums, and harmonica.  Lost Souls...reflects the musical influences that he grew up with, channeling Doc Watson and Neil Young.  As the album title suggests, the words tell the story of heartbreak and despair, but don't take this songwriter for a pessimist.  Nance holds the ability to turn these dark moments in to words of hope and optimism. "We've All Got Chains" expresses this with the lyrics, "...but the storms gonna pass and the stars gonna shine/let's pack up our earnings, start stepping in line...I will roll, I will roll."  The warm tones of Nance's voice and uncomplicated sounds of the harmonica, bass, and guitar create a natural and calming sound that accurately captures the complexities of life.
Rob Nance is typically joined by his brother, Jordan, on the stand-up bass, as he was last night for their performance at The Pour House.  They recorded Lost Souls and Locked Doors in Boone along with Sean Leary on drums. The group is set to play at The Pinhook in Durham on Thursday, January 23. Rob Nance and the Lost Souls will then begin their winter tour which includes stops in Texas, Colorado, and Nebraska.  To learn more about Rob Nance and to see a complete list of the tour, check out his website at http://robnance.com. See the pair perform "Ain't Losing Yet" in the video below: