Chapel Hill's Superchunk will play in Saxapahaw at the Haw River Ballroom Thursday, April 10th.  The band has taken nearly a decade off from recording and touring, but they're back in the game just in time to celebrate the 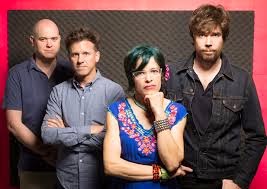 twenty-five year anniversary of Merge records.  Considering the group's members, Mac and Laura created the label in 1989, they will certainly play a role in celebrating Merge's success and growth through the years.

Merge Records is scheduled to reissue Superchunk's out-of-print album, Indoor Living (1997) on February 25.  The reissue will include a recorded 1997 concert at Duke University.

Superchunk released I Hate Music in 2013.  It is a highly energetic album that takes a more mature look at life's larger questions, dilemmas, and triumphs.  For more details, check out the official Superchunk website.

Tickets are on sale now for the Saxapahaw show via Ticketfly.